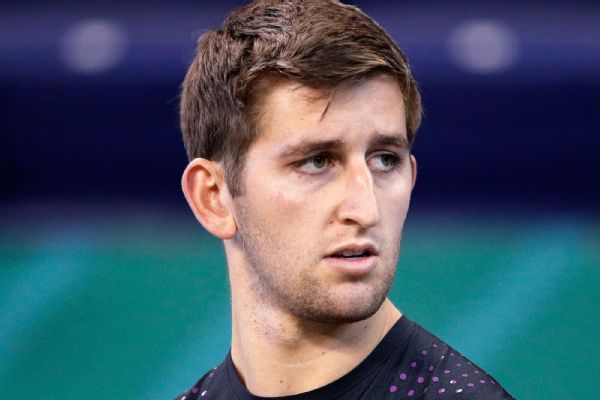 LOS ANGLES -- Josh Rosen, one of the top-rated quarterbacks leading up to this year's draft, threw in front of representatives from basically every NFL team during UCLA's pro day on Thursday, including Hall of Fame quarterback and Denver Broncos president of football operations John Elway.

Earlier this week, Rosen received tutelage from another potential Hall of Fame quarterback:Aaron Rodgers, who is represented by the same agency, Athletes First, and is advising rookies as part of an upcoming documentary.

"That was an awesome experience," Rosen said after his pro day. "Aaron Rodgers is an incredible guy and an incredible talent. I learned a lot from him. He was incredibly helpful. He strongly conveyed to me that he's an open phone line for any conversations or questions I have."

Rosen didn't go into specifics, but said Rodgers has "given me a lot of advice on how to handle the process -- everything from media to on the field, X's and O's, anything and everything in between."

Rosen's workout took place on the second day of NFL free agency, but it was well-attended nonetheless. The Broncos, who recently signed Case Keenum but may still take a quarterback with the No. 5 overall pick, traveled with a noteworthy contingent, including Elway, head coach Vance Joseph and senior adviser Gary Kubiak.

Sean Payton of the New Orleans Saints, Marvin Lewis of the Cincinnati Bengals and Anthony Lynn of the Los Angeles Chargers were among the other head coaches in attendance. General managers from the Atlanta Falcons (Thomas Dimitroff) and the New York Jets (Mike Maccagnan) were also present, though some of the big names might have been more interested in offensive lineman Kolton Miller or wide receiver Jordan Lasley.

The workout took place a couple of weeks after the scouting combine in Indianapolis, an event Rosen expressed excitement about because it represented his opportunity to get in front of teams and address any concerns they may have about his personality and his passion for football.

"I thought it went really well," Rosen, who will take part in individual workouts next week, said of prior meetings with teams. "I'm not really trying to project anything; I'm just trying to be me. I thought teams got to know me really well, and I think we'll find out on draft day if they really liked me or not."

A shoulder injury limited Rosen to only six games as a sophomore in 2016, but he still finished his Bruins career with 9,340 passing yards, 59 touchdowns, 26 interceptions and a 61 percent completion percentage -- a mark that would have been a lot higher if not for an inordinate amount of dropped passes -- in 30 games.

He is a natural thrower of the football who has ideal size -- he's nearly 6-foot-4, 217 pounds and has 9 3/4-inch hands -- and is accustomed to operating out of a pro-style offense. But coaches, scouts and pundits have raised reported concerns about Rosen's demeanor. He's exceedingly intelligent, but some are worried he might be difficult to coach, while others have questioned whether his teammates actually like him. There have also been questions centered on whether he is passionate enough about football to do the work required at a position as demanding as quarterback.

His UCLA center, Scott Quessenberry, is "trying to shut all those rumors down, but it just doesn't seem to be working."

"I love Josh to death," Quessenberry said. "He's just such a good guy, first and foremost, and he loves playing football, loves his teammates, he loves being around the guys. And you can see that. It beams off him when he's out here. He's having fun, and I think that was one of the biggest questions was, 'Does he love the game of football?' Look at him over there right now. He's freaking beaming."

Teams who might be a little apprehensive about Rosen's personality haven't necessarily been asking pointed questions.

"Most of it has been like, 'Can you speak to your mistakes in the past?'" Rosen said. "Mostly I've learned from them. I'm not going to sit here and say, 'I'm sorry, I won't do it again,' because I wouldn't be doing them any justice. I'm going to say how I've learned, how I've grown. I've learned there's a time and a place for everything. I'm not going to change who I am, but you might trim the fat a little bit and stay on message."

Rosen threw underneath clear skies with a slight wind. He completed a handful of impressive downfield throws to each sideline, but he airmailed his receivers on some deep targets.

Rosen, 21, said he "felt really good" with his workout and stated once again that he believes he is the best quarterback available, even in a class that includes Josh Allen, Baker Mayfield, Sam Darnold and Lamar Jackson.

"I think I put the ball where it needs to be very accurately, better than everyone else," Rosen said. "That's what I do as a quarterback. They're all incredible players, but I'm confident in my abilities."
Report a correction or typo
Related topics:
sportsespnjosh rosennflpro daynfl draftjohn elwayucla bruins
Copyright © 2021 ESPN Internet Ventures. All rights reserved.
More Videos
From CNN Newsource affiliates
TOP STORIES