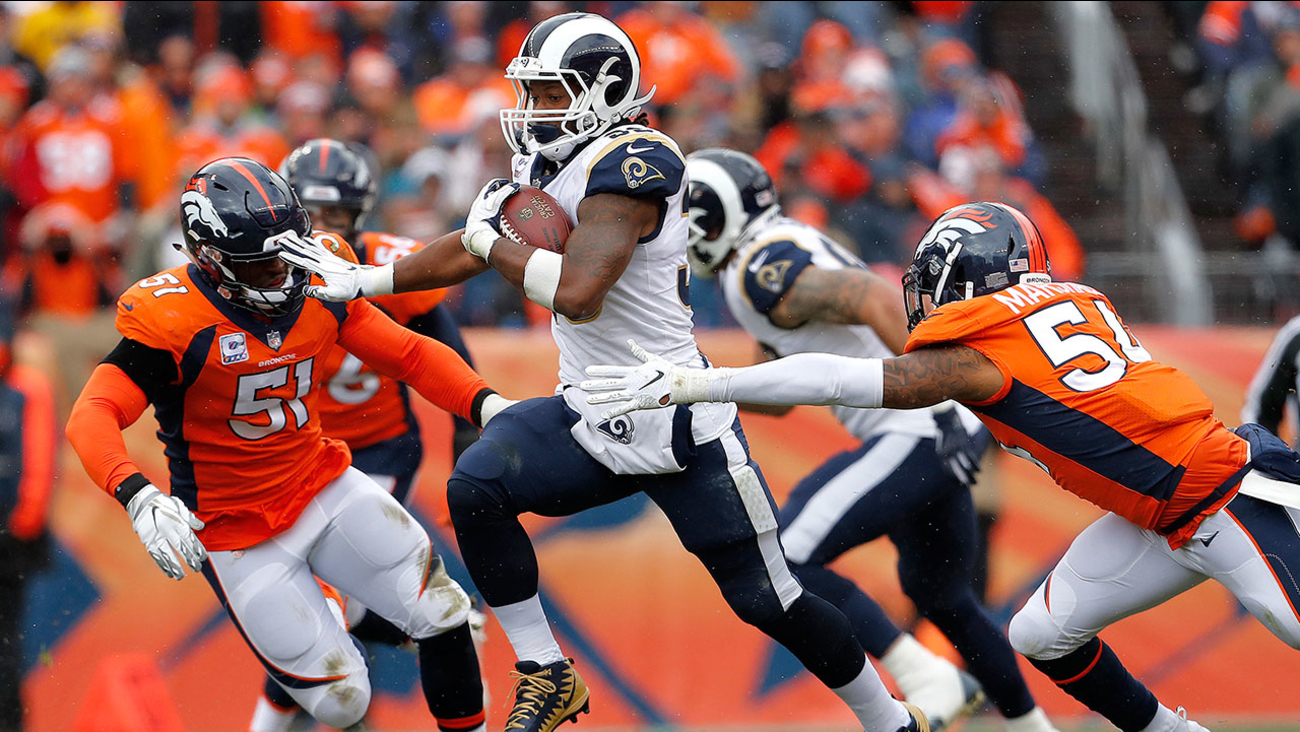 Rams running back Todd Gurley carries the ball as he's chased by two Bronco linebackers during a game in Denver on Sunday, Oct. 14, 2018. (AP Photo/Joe Mahoney)

DENVER -- Todd Gurley rushed for a career-high 208 yards and two touchdowns on 28 carries and the Los Angeles Rams' celebrated Wade Phillips' homecoming Sunday with a 23-20 win over the reeling Denver Broncos.

The Rams, who had surrendered 31 points in back-to-back games, improved to 6-0 in sending the Broncos (2-4) to their fourth straight loss.

The Broncos pulled to 23-20 on Case Keenum's 1-yard dart to Demaryius Thomas with 1:22 remaining, capping a 77-yard drive that included three defensive penalties.

Rams receiver Robert Woods, however, knocked Brandon McManus' onside kick out of bounds, and the Rams ran out the clock with Jared Goff (14 of 28 for 201 yards) twice taking a knee.

Phillips was the Broncos' beloved bandmaster when they were celebrating their Super Bowl 50 triumph, but his contract wasn't renewed after the 2016 season and he joined Sean McVay in sunny Southern California.

After an overnight snowstorm, the game-time temperature of 25 degrees marked the second-coldest in Denver prior to November in franchise history.

The cold did nothing to slow down Gurley, who scored his 10th and 11th touchdowns of the season.

One was on a 10-yard run that gave the Rams a 13-3 halftime lead, the other, a 1-yard run that made it 20-3 before the Broncos' frenetic comeback attempt fell just short.

Gurley's first score came after a boneheaded move by Broncos receiver Emmanuel Sanders, who thought he had a 44-yard TD catch and jabbed a finger in cornerback Troy Hill's face, drawing a taunting foul.

Upon review, Sanders was ruled down at the 1, and the unsportsmanlike 15-yard penalty pushed the Broncos back to the 16.

Instead of an extra point to give Denver a 7-6 lead, McManus ended up kicking a 28-yard field goal to cut Denver's deficit to 6-3.

Sanders later scored on a 22-yard catch to make it 20-10, and McManus' short field goal made it a one-score game with about nine minutes to go.

The Rams countered with Cairo Santos' 21-yard field goal that put the Rams up by 10 with 3:15 left.

Broncos coach Vance Joseph promised changes after Denver's demoralizing 34-16 loss to the New York Jets last week in which they surrendered 323 yards rushing, including 219 to Isaiah Crowell, but those alterations were either cosmetic or schematic - and, ultimately, fruitless.

Max Garcia replaced right guard Connor McGovern, but McGovern came back in and Garcia moved over when left guard Ronald Leary (ankle) got hurt in the third quarter.

If the Broncos had better options, scuffling cornerback Bradley Roby - who again gave up big plays - and left tackle Garett Bolles - who was flagged for his NFL-high sixth holding call Sunday - also might have been benched.

Roby took over Aqib Talib's starting spot when the Broncos traded Talib to the Rams in the spring. Talib is sidelined by an ankle injury. Still, Talib made the trip with his teammates, walking with a boot on his left foot and a crutch under his right arm and was on the sideline during warmups.

Rams WR Cooper Kupp was carted off the field after wrenching his left knee when Broncos S Darian Stewart horse-collared him on the Broncos sideline after a 12-yard jet sweep in the second quarter, but he made a surprising return in the second half. OLB Matt Longacre (back) and LT Andrew Whitworth (possible concussion) also left the game.

Rams: Wrap up three-game road swing with a visit to San Francisco.