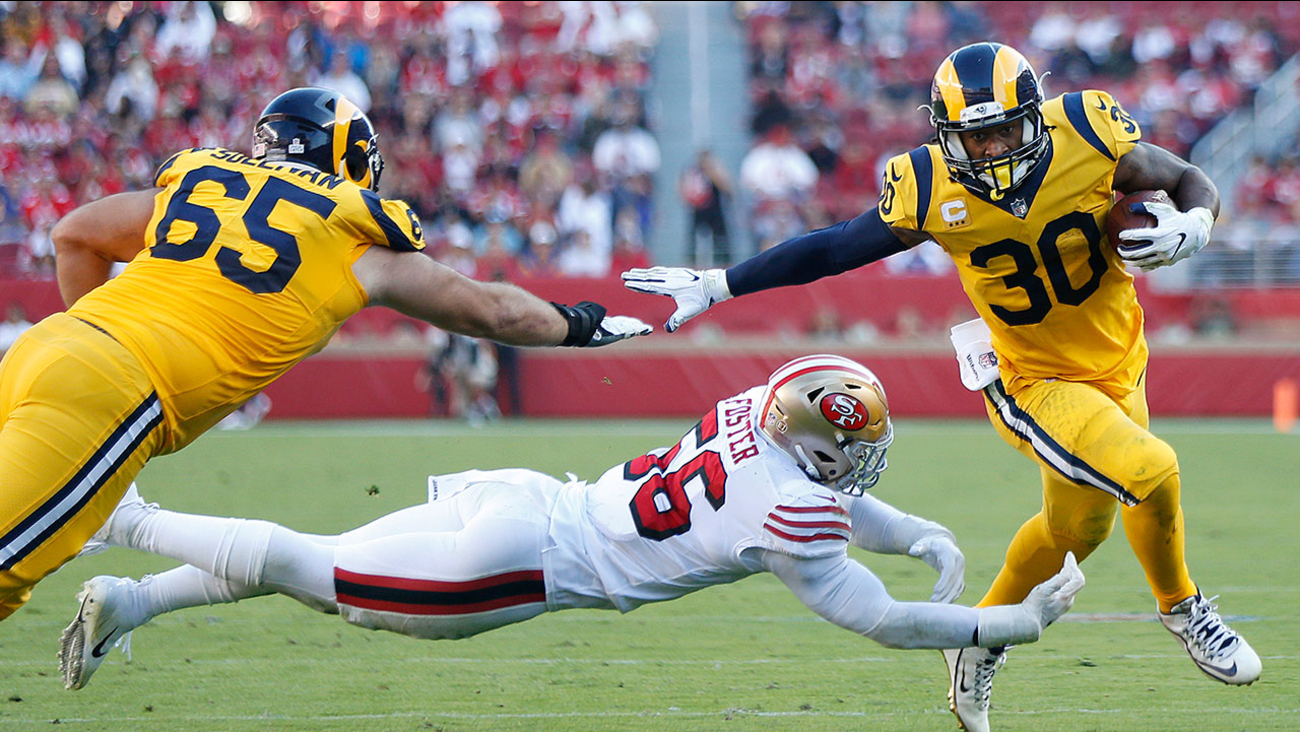 The Rams (7-0) intercepted C.J. Beathard twice and recovered two fumbles to give them seven straight wins to open the season for the first time since 1985.

The Rams began 6-0 for three straight seasons in 1999-2001 before losing the seventh game.

The 49ers (1-6) made sure that wouldn't happen this year by repeatedly giving the ball away, justifying the decision the NFL made to flex this game out of prime time following the season-ending knee injury to San Francisco quarterback Jimmy Garoppolo.

Beathard has thrown seven interceptions and lost three fumbles in four starts as the 49ers have committed 14 straight turnovers since their last takeaway on Sept. 30 against the Chargers.

The Rams dominated defensively with Aaron Donald recording four sacks, a forced fumble and a fumble recovery ; linebacker Cory Littleton having two sacks and a blocked punt for a safety ; and Troy Hill and John Johnson III intercepting passes.

The turnovers set up 24 points for the Rams, who put up the big scoring day despite gaining a season-low 331 yards of offense.

Gurley scored on a 7-yard run in the second quarter after a fumble by Matt Breida and 1-yard run after Johnson's interception in the third. He capped his fifth three-touchdown game of the past two seasons with a 12-yard catch after JoJo Natson had a 36-yard punt return to the 13. Gurley's 14 TDs this season tie Priest Holmes (2002, '04) for the most through seven games in the Super Bowl era.

The Niners had a minus-1 turnover margin through the first 14 quarters of the season and are minus-14 over the last 14 quarters, matching a franchise worst with a minus-15 turnover margin through seven games set by the 1980 team. During one particularly rough stretch in the first half, the 49ers had a five-play sequence of lost fumble, fumbled snap, incomplete pass, sack and blocked punt.

Rams DB Troy Hill left in the first half to be evaluated for a possible concussion. ... 49ers S Adrian Colbert was taken off on a cart after injuring his right leg in the third quarter. ... San Francisco LB Reuben Foster left in the fourth quarter with a shoulder injury.

The 49ers unveiled statues of Joe Montana and Dwight Clark before the game commemorating "The Catch" that launched a dynasty in the 1980s. The statues are 23 yards apart - the same distance that was between Montana and Clark on the game-winning play during the NFC title game win over Dallas on Jan. 10, 1982.