Greg Zuerlein, Rams star kicker and NFL's leading scorer, out for season with back injury 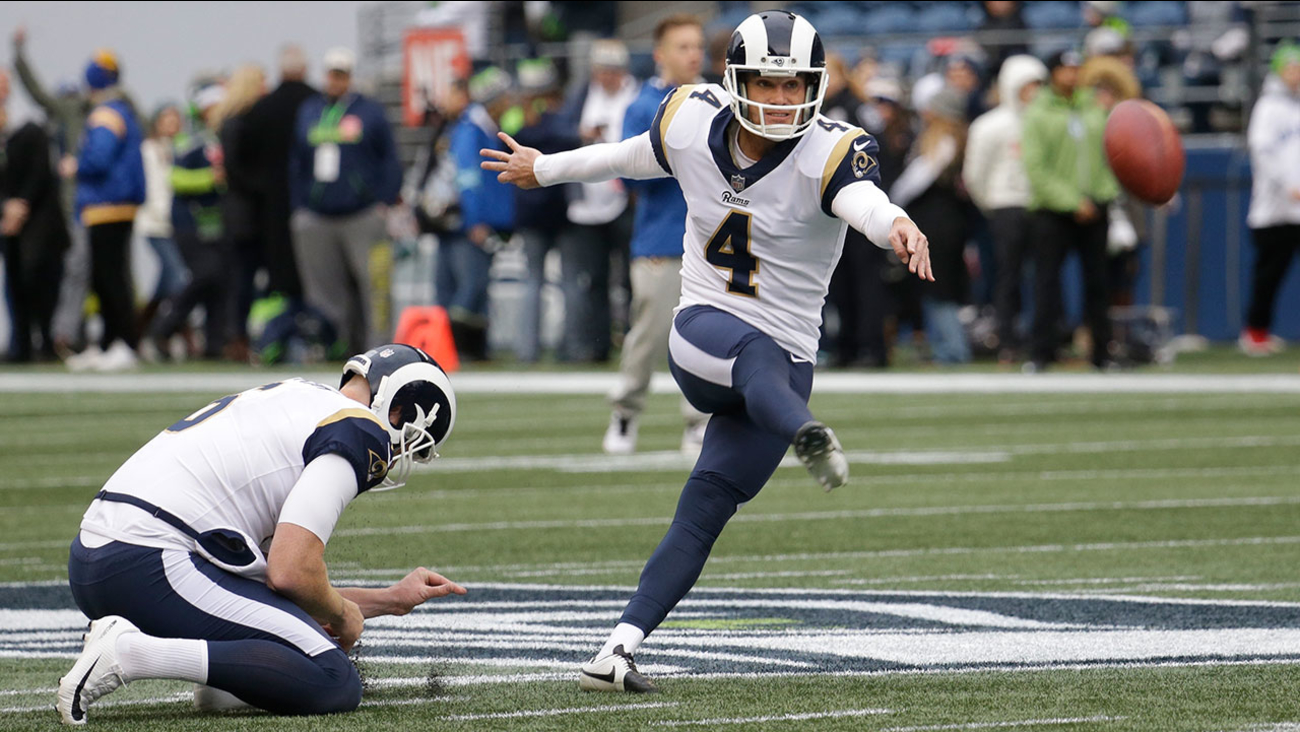 THOUSAND OAKS, Calif. -- The Los Angeles Rams spent Tuesday celebrating their excellence on special teams after having their kicker, punter and return specialist voted in as Pro Bowl starters.

Less than a day later, the Rams were putting contingency plans into action after placing kicker Greg Zuerlein on injured reserve Wednesday.

Zuerlein, who leads the NFL in scoring this season with 158 points, has been dealing with a lingering back injury all season and will undergo surgery Thursday morning to repair a herniated disc, head coach Sean McVay said.

Sam Ficken, an undrafted free agent from Penn State, was signed after the Rams worked out 10-12 kickers Wednesday.

The Rams (10-4) can clinch the NFC West by winning one of their final two games, at the Tennessee Titans on Sunday or hosting the San Francisco 49ers on Dec. 31. McVay said not having the reliable Zuerlein, who has made 126 of 139 career field goal attempts (90.6 percent) inside of 50 yards, might have an impact on how he calls plays on offense.

"It does alter your approach a little bit in terms of the comfort level that Greg provides, and we got to be better in the red zone then," McVay said.

Zuerlein aggravated the injury before the 42-7 win at Seattle on Sunday, but was able to make two field goals and four of five extra points against the Seahawks despite being barely able to stand.

"He couldn't even get out of bed," McVay said. "He slept on it funny. It was miraculous for him to even play the other day, what a gutsy performance it was."

The discomfort got to a point where Zuerlein could no longer kick in the fourth quarter, forcing the Rams to keep their offense on the field on fourth down.

Zuerlein was on pace to set a new team single-season record for scoring, breaking the previous mark set by kicker Jeff Wilkins with 163 points in 2003, and had an outside chance to chance to best LaDainian Tomlinson's NFL single-season record of 186 points in 2006. Zuerlein made 38 of 40 field goals, including six of seven from 50 yards or longer, and 44 of 46 extra points.

Zuerlein was voted to the Pro Bowl for the first time Tuesday, along with return specialist Pharoh Cooper. Hekker was voted in for the fourth time.

McVay is hopeful that special teams coordinator John Fassel's strong track record will carry over with Ficken, who has never kicked in a regular-season game and spent time in training camps with the Jacksonville Jaguars and Kansas City Chiefs.

Ficken made 24 of 29 field goals and all 28 extra point attempted in his senior season for the Nittany Lions in 2014.

"Signing Ficken, it was something where you totally trust (Fassel), what he thinks is best," McVay said. "I'm not going to pretend to be an expert. We had a bunch of guys come in. That was who he felt like was going to be the best option."
Report a correction or typo
Related topics:
sportslos angeleslos angeles ramsnflfootball
Copyright © 2021 by The Associated Press. All Rights Reserved.
More Videos
From CNN Newsource affiliates
TOP STORIES