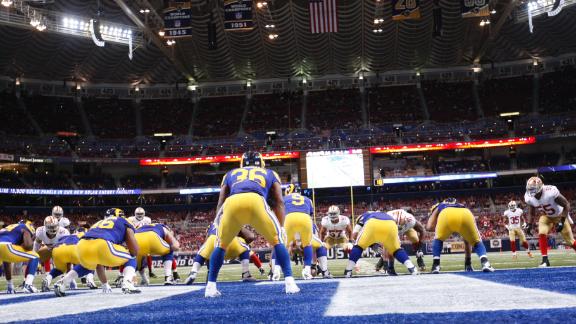 EARTH CITY, Mo. -- One way or another, the muddy future of the Rams in St. Louis will gain clarity in the next 60 days.

Missouri Gov. Jay Nixon participated in a 24-minute conference call with local reporters Wednesday morning with the objective to discuss the state and city's desire to retain the NFL franchise.

"Make no mistake about it, St. Louis is an NFL city," Nixon said. "Being an NFL city is a matter of civic and state pride and one of international significance. An NFL team in St. Louis sends a clear signal that this city is a worldwide player and sets it in a special class when it comes to a competitive, global marketplace. The economic impact of the Rams team in St. Louis extends long beyond Sunday afternoon."

As part of Nixon's plan to retain the Rams, he announced that he has appointed Dave Peacock, the former president of Anheuser-Busch, and local attorney Bob Blitz to spend the next two months piecing together options for the city's next stadium solution.

The 60-day window bears significance beyond an arbitrary time frame. According to Nixon, the Rams have set a date of Jan. 28 for when they will decide whether to convert their expiring lease on the Edward Jones Dome to a year-to-year setup.

The Rams can opt out of their current lease on the Edward Jones Dome after this season because of the "first tier" clause that was in the initial lease the team signed when it moved from Los Angeles. If the Rams want to move back to Los Angeles or anywhere else for the 2015 season, they must notify the league of their intent by Feb. 15.

Having a Jan. 28 deadline builds in additional time for the sides to discuss the options that Peacock and Blitz are expected to lay out. It also sends a clear message that the city is doing what it can to keep the team in St. Louis. That's important because NFL rules on relocation state that all efforts must be exhausted to keep the team in its current city before it can make any move.

"We obviously feel this is the right thing at this time," Nixon said. "The Jan. 28 date up for the option, we thought it was important to make sure that prior to the time that they set to make a determination as to whether they would avail themselves on the potential of a year-to-year lease that we had and I had in front of me options of what we could do.

"I thought it was important for us to be on offense prior to that 28th deadline."

Nixon did not go into detail about some of the possible solutions that have been rumored or offer an approximate price tag for how much a new stadium would cost. He did, however, point to three keys to getting something accomplished.

"These deals can get somewhat complicated," he said. "The fact that we are getting relatively close to retiring the debt on the existing building, saying we need some private sector investment also and that this has to have a provable return for the region other than what happens on Sunday, Monday or Thursdays."

According to Nixon, those are all considerations that will be taken into account as the city and state assess the next move with input from the Rams.

To this point, Rams owner Stan Kroenke has remained mum on the topic, similar to how he handled the decision to purchase the majority ownership of the team in 2010 at the deadline for him to match the offer of now Jacksonville owner Shahid Khan.

Nixon said Wednesday that he and Kroenke have been in touch but offered no details on how those conversations have gone.

"We've remained in good communication throughout all of this with everybody," Nixon said. "But I'm not going to be characterizing any discussions that I or any of my staff in the governor's office have had with the Rams, the Rams organization or the NFL."