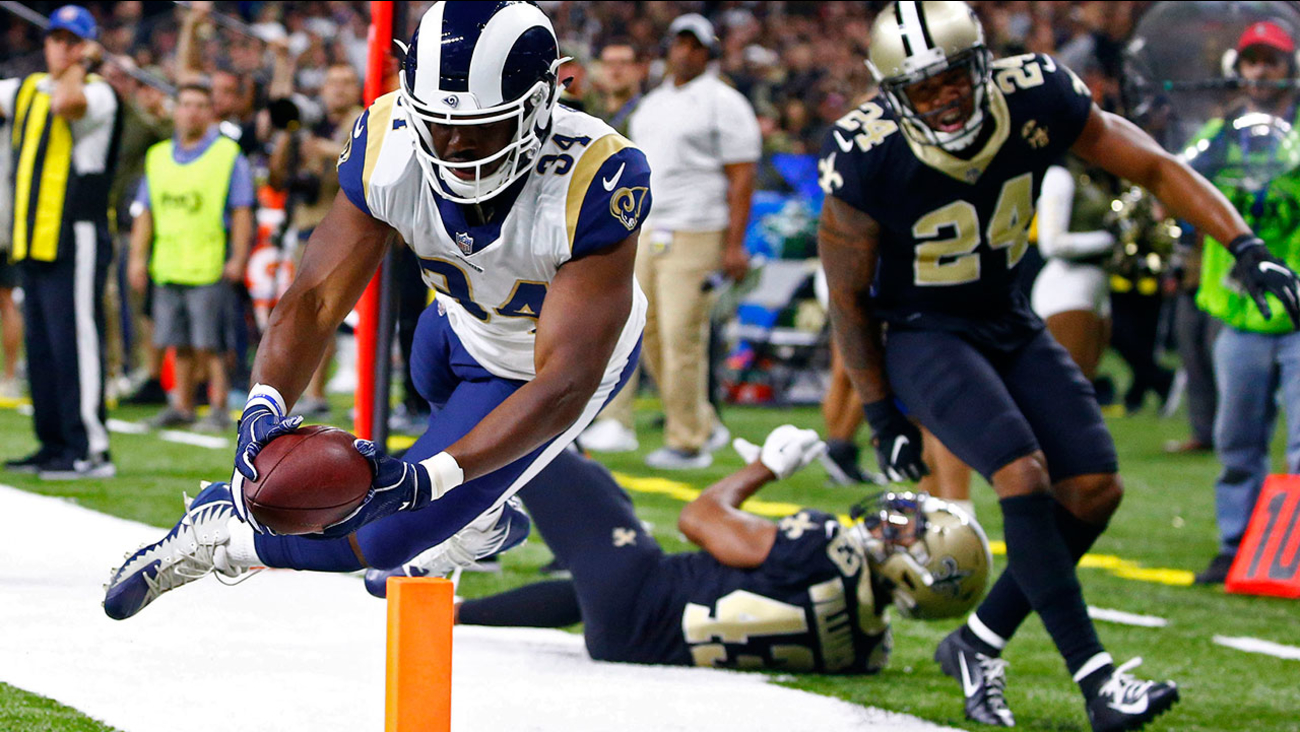 NEW ORLEANS -- Michael Thomas caught a late 72-yard touchdown reception and then celebrated with a cellphone in a throwback to another famous New Orleans play, and the streaking Saints handed the Los Angeles Rams their first loss of the season with a 45-35 win on Sunday.

Drew Brees passed for 346 yards and four touchdowns in New Orleans' seventh straight win, and Thomas finished with a club-record 211 yards receiving. But what happened after their last connection of the day really stole the show in a wild shootout between two of the NFL's best offenses.

Thomas' long TD came on a pivotal third-down play with about four minutes to go, when the Rams seemed to expect the Saints to run a play closer to the first-down marker. Thomas ran free behind Marcus Peters, caught Brees' long throw virtually in stride and ran straight to the goal post, where he got out an old-school flip phone - reminiscent of Joe Horn's Sunday night TD celebration in 2003.

Like Horn, Thomas was penalized, but the Rams never threatened after that.

P.J. Williams, credited with causing two turnovers in New Orleans' previous victory at Minnesota, broke up a fourth-down pass intended for Brandin Cooks, virtually sealing the result. The former Saints receiver, who caught six passes for 114 yards and a TD, fell to his knees in frustration.

New Orleans running back Alvin Kamara scored three times, twice on runs and once on a 16-yard catch-and-run - all in the first half.

The Rams (8-1) very nearly pulled off an extraordinary comeback in the Superdome, where the crowd was revved up after New Orleans (7-1) raced to a three-touchdown lead late in the first half.

Los Angeles rallied to tie the game at 35 with 21 unanswered points in just less than 21 minutes off the clock, starting with Greg Zuerlein's 56-yard field goal as time expired in the first half.

Receiving the kick to start the third quarter, Los Angeles put together an 11-play touchdown drive capped by Malcolm Brown's 18-yard catch and run in which the running back hopped over safety Marcus Williams along the sideline and kept his balance long enough to reach the ball across the goal line.

After another field goal cut New Orleans' lead to 35-27, the Rams forced a second straight punt and tied the game on Cooper Kupp's 41-yard catch and run along the left sideline.

The Saints regained the lead on Wil Lutz's 54-yard field goal, and then forced the Rams' first punt of the game with about five minutes left.

Brees threw three touchdowns passes in the first half, when the Saints scored 35 points.

Both teams scored touchdowns on each of their first two possessions, starting with Kamara's 11-yard run and Todd Gurley's 8-yard score.

Gurley's score have him a TD in a club-record 12 straight games, passing Hall of Famer Elroy Hirsch.

The tenor of the game changed when outside linebacker Samson Ebukam stripped New Orleans running back Mark Ingram and defensive Aaron Donald recovered on the Saints 22. But four plays later, Johnny Hekker was ruled down just short of the first down marker on a fake field goal. The Rams challenged, but the call stood, and the Saints marched back down the field, scoring on Brees' quick hit over the middle to rookie Tre'Quan Smith from 4 yards out.

That was the first of three successive touchdowns for New Orleans.

After Zuerlein missed a 51-yard field goal attempt, the Saints scored on Brees' 13-yard pass to Ben Watson with just more than a minute left in the second quarter. Shortly after, Alex Anzelone's diving interception of Jared Goff's pass over the middle set up Kamara's short TD run with 26 seconds to go in the half.