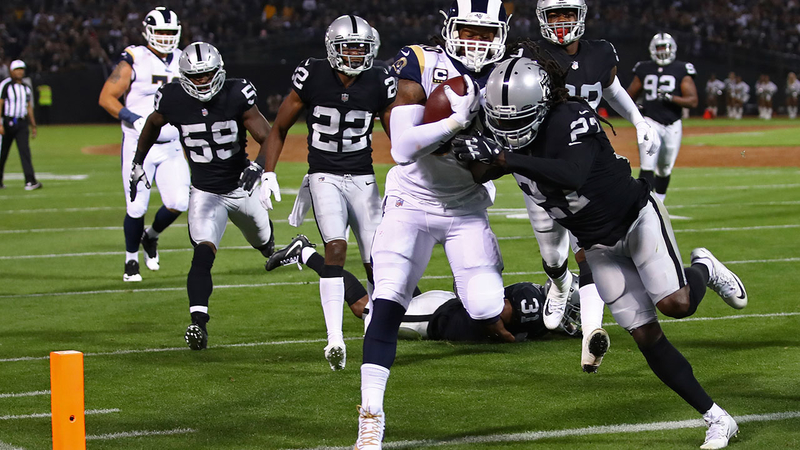 OAKLAND (KABC) -- The Los Angeles Rams spoiled Jon Gruden's return to coaching with a 33-13 win over the Raiders Monday in Oakland.

A pick-6 by cornerback Marcus Peters at the 2-minute mark dashed any hopes the Raiders might have had for a late rally.

Gruden coached the Raiders from 1998 to 2001 and then was brought back by owner Mark Davis this season.

His second stint started well with the Raiders taking the opening kick and driving 75 yards for a touchdown on a 10-yard run by Marshawn Lynch. The Rams had Lynch stood up at the 3, but he powered his way into the end zone with help from a push by his offensive linemen.

Oakland managed just six points the rest of the way against a defense fortified by the offseason additions of former All-Pros Peters, Aqib Talib and Ndamukong Suh.

Derek Carr threw an interception in the end zone to John Johnson in the second quarter, another in the fourth when he lofted a pass right to linebacker Cory Littleton, and then the third to Peters.

Oakland's defense could have used him to slow down Goff, who, other than one sack, felt little pressure most of the night.

Gurley, too, at times seemed unstoppable, running for 108 yards, plus gaining 39 yards and a touchdown as a receiver.

The win by the Rams continues the dramatic turnaround from last season led by then-new head coach Sean McVay.

After that 11-5 finish in 2017 and a series of high profile signings in the offseason, the Rams started the season as one of the oddsmakers' favorites to win the Super Bowl.

The decisive victory before the Monday Night Football audience did nothing to dampen that enthusiasm.

The Raiders, who left Los Angeles in the mid-1990s, still retain a strong fan base in Southern California. Many from Raider Nation made the trek north to Oakland, along with plenty of Rams fans, for the season opener.