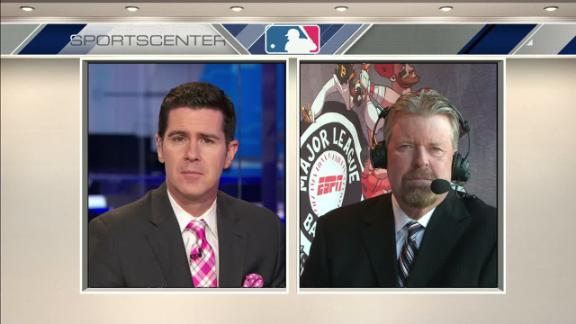 The Texas Rangers released injury-plagued outfielder Josh Hamilton on Tuesday with the possibility of the former MVP rejoining the team on a minor-league deal in 2017.

Hamilton underwent season-ending surgery in June to repair torn cartilage in his left knee, and he said in late July that heexpects to be fully healthy and ready in time for spring training.

The 35-year-old outfielder was eligible to be released after he was removed from the 60-day disabled list. That opens up a roster spot for the Rangers for the remainder of this season and affords Hamilton the opportunity to return to the team for spring training on a non-roster deal, if they would have him back.

"We plan to monitor Josh's progress as he continues his rehab process and is medically cleared this winter," general manager Jon Daniels said in a statement. "Given the rules in place, releasing him before the end of this month allows us to keep the door open to extending the relationship in the future."

Hamilton had surgery on June 8 to reconstruct his ACL, and he also have repairs done to his meniscus and lateral cartilage in the knee.

That was Hamilton's third surgery on the knee since September, along with cortisone shots and a stem cell and a platelet-rich plasma injection during spring training that may have actually led to more damage.

Hamilton was a five-time All-Star and the 2010 AL MVP in his five seasons with the Rangers from 2008-12. He left in free agency and signed a $125 million, five-year contract with the AL West rival Los Angeles Angels.

The Angels traded Hamilton back to Texas last year when he was coming back from shoulder surgery, and agreed to pay the Rangers for all of his $24 million salary this season and $22 million of the $24 million the outfielder is due in 2017, the last year of that contract. Hamilton played only 50 games last season, hitting .253 with eight homers and 25 RBI.