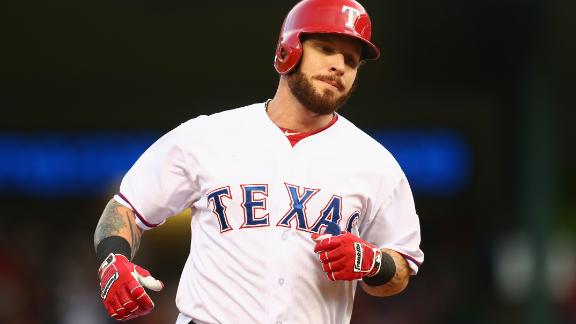 BALTIMORE -- Josh Hamilton is back on the Texas Rangers' 25-man roster, eager to jump-start a season that has been marred by injury.

The 34-year-old slugger was activated from the 15-day disabled list Tuesday and put in the starting lineup against the Baltimore Orioles.

Hamilton was sidelined since May 31 with a strained left hamstring. Earlier this season, while with the Los Angeles Angels, he languished on the DL recovering from shoulder surgery.

He has played in only seven games this season, batting .273 with two homers and five RBI. In his return, Hamilton was fifth in the lineup and in left field.

"I feel good," Hamilton said. "I'm excited about playing today. I took early BP to knock some of the dust off. It felt good. I'm just trying to get back into a routine."

He isn't 100 percent healthy, but he hopes to be there soon.

"I just want to be myself," Hamilton said. "I want to have fun and be myself. I'll have some good days and be able to contribute to help my team win. I'm not going to play good all the time ... but I can still be a presence and encourage my teammates and have fun and play."

Texas made room for Hamilton on the 25-man roster by optioning rookie Joey Gallo to Triple-A Round Rock. The 21-year-old Gallo had his contract purchased from Double-A Frisco on June 2 and hit .218 with five home runs and 13 RBI over 25 games in his major league debut.

The third baseman/outfielder ended his stint with a 7-for-47 skid that included 27 strikeouts.

"It was a tremendously good experience just to be up here and kind of just see what the big league life is and face the pitchers that we faced," Gallo said. "I had some success and I had some failures. I kind of experienced both things."

He is the first Rangers player to homer in each of his first two games. Gallo, the organization's 2014 minor league player of the year, will be making his initial foray in Triple-A ball.

Manager Jeff Banister said: "We are going to need Joey Gallo at some point. I challenge him to go back, take his leadership skills and go to work."

Hamilton, meanwhile, could ultimately return to his accustomed spot in center field after he fully recovers from the hamstring issue. But the Rangers are going to be careful with him.

"It is a hamstring and Josh is a big man," Banister said. "I want to be able to make sure to manage this for the long-term with Josh as opposed to pushing him and taking the risk of losing him."