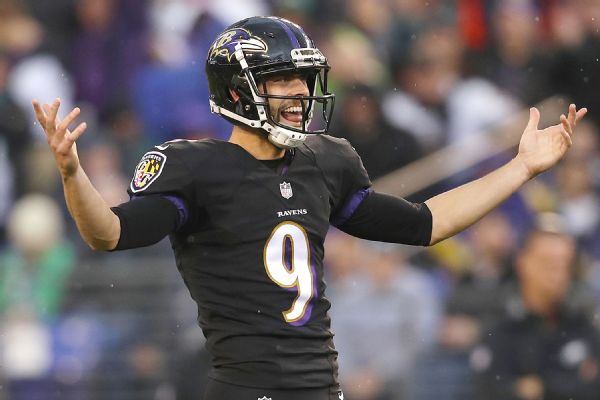 Ravens kicker Justin Tucker started off a week of Pro Bowl practices on the right foot. A strong right foot.

Tucker booted a 75-yard field goal on Wednesday that hooked inside the left upright in Orlando, Florida. Tucker filmed the kick and posted it on social media.

There were obviously factors working in Tucker's favor. The video shows him kicking off a tee (so no one is rushing) and with a strong tailwind (evidenced by the flags on top of the goalposts).

Still, the 75-yard boot meant he had to kick the ball from his own 35-yard line. To put that in perspective, the NFL record for the longest field goal is 64 yards.

Tucker's kick on Wednesday is his latest from long range. His career long is a 61-yard field goal, and he crushed a 69-yarder during training camp last year.

In the preseason, Tucker said he could hit a field goal from 84 yards in prime conditions, a statement later bashed by Broncos counterpart Brandon McManus and then-Denver punter Britton Colquitt.

Tucker went on to tie an NFL record with 10 kicks from 50 yards or beyond this season.