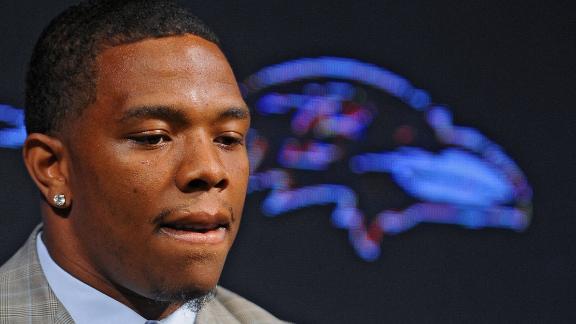 OWINGS MILLS, Md. -- The Baltimore Ravens are disputing the claim by Janay Rice, wife of released running back Ray Rice, that the team told her to apologize for her role in the February domestic violence altercation that left her knocked unconscious.

The Ravens' statement comes days after Janay Rice told "Today" that the team gave her and Ray Rice "a general script" of what to say at their news conference in May. She gave ESPN a similar accountin a story published last week.

"After Ray informed the Ravens that Janay wanted also to speak at the event, I asked Ray on two different days if Ray wanted me to speak with Janay in advance of the press session. Both times, Ray declined and said: 'She's good. She knows what she wants to say,'" Ravens senior vice president of public relations Kevin Byrne said in a statement released Wednesday evening. "At no time prior to the May 23 session did we provide talking points, a script or suggested script to Janay or speak with her about the press event. We did not recommend or suggest to Ray or Janay that she apologize in any way."

During the May news conference, the Ravens' official Twitter account highlighted the apology from Janay Rice. That tweet was deleted after the Ravens released Ray Rice in September.

The Ravens acknowledged they did provide Ray Rice with talking points that included:

I Take Full Responsibility For What Happened That Night.

We Will Not Let This One Night Define Who We Are

I Was Wrong. I Made a Mistake.

I Regret My Behavior. I'm Embarrassed.

I Hold Myself to a Higher Standard and I Failed.

Rice was criticized for how he handled that May news conference because he repeatedly looked down at notes on his cellphone.

"We understand that the NFLPA also provided Ray talking points and that he repeatedly looked at these on his phone during the May 23 press event," Byrne said in his statement.

Rice, a three-time Pro Bowl player for the Ravens, won the appeal of his indefinite suspension Friday and has been reinstated to the NFL.

He was released by the Ravens on Sept. 8, the day the video was released showing him punching his then-fiance in a casino elevator. The Ravens later held a jersey exchange, giving fans the chance to trade in their No. 27 Rice jersey for an available jersey of another Ravens player.

Rice has since filed a grievance against the team claiming wrongful termination of his $35 million contract. If he wins in that case, he could collect as much as $3.5 million in salary (what he will lose in not playing the final 14 games this season).

On Monday, Ravens coach John Harbaugh declined to predict whether another team will sign the running back this year.

"I don't know. I can't speak for any other team," Harbaugh said. "I have no idea how that will play out. Ray and Janay are very good friends of ours. We wish them nothing but the best professionally and nothing but the best familywise. I'm sure things will work out well for them because they're good people."