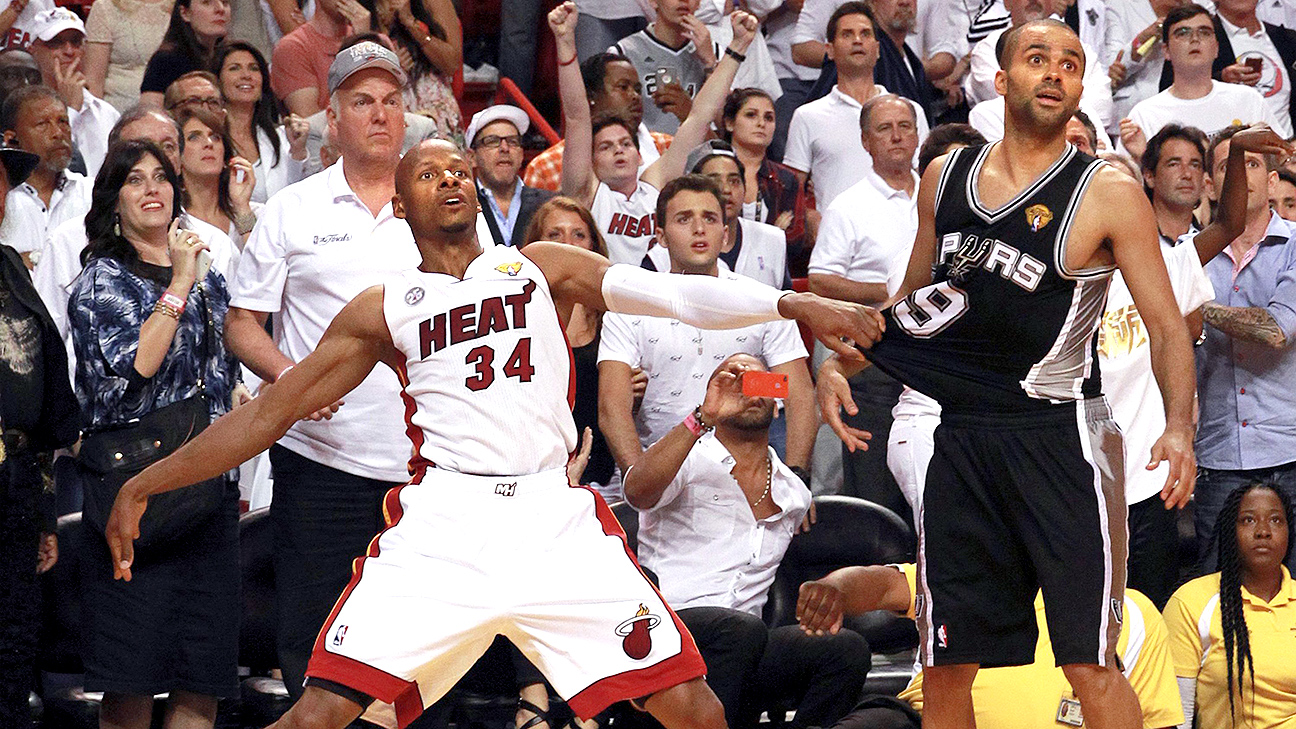 It's as unforgettable a moment as there is in NBA history, no matter how much San Antonio Spurs fans would love to forget it. Chris Bosh pulled down the rebound then passed out to a backpedaling Ray Allen, who calmly knocked down a 3-pointer with 5.2 seconds left to tie Game 6 of the 2013 NBA Finals. Allen's Miami Heat would go on to win that game, then the series in Game 7 two nights later.

ESPN will re-air Games 6 and 7 of the 2013 NBA Finals tonight starting at 7 p.m. ET. In advance of that broadcast, we asked our expert panel to rank the greatest shots in NBA Finals history. Four legendary moments stood out above the rest, including Allen's incredible shot. Read all about them, then cast your vote for which is the best of the best.

As the game clock ticked down inside the final minute of Game 7 of the 2016 NBA Finals, the Cleveland Cavaliers and Golden State Warriors were tied 89-89. The total score for the series to that point was tied too, 699-699. After a screen by JR Smith forced a defensive switch, Irving found himself with the ball in his hands on the right wing facing off against back-to-back league MVP Stephen Curry.

As one of the greatest ball handlers ever, Irving went into his bag. Dribbling with his right hand, Irving used an inside-out escape dribble to set up his pull-up 3-pointer that fell through the net with 53 seconds remaining.

Curry missed a 3 over Kevin Love on the ensuing possession, and the Cavs were in the driver's seat for their first title in franchise history.

Irving, who was just 24 years old at the time, was responsible for the go-ahead bucket to break a 52-year championship drought in Cleveland. The fact that Irving's 3-pointer came against someone who is widely considered to be the best 3-point shooter ever, playing in an arena where the Warriors had lost only three games all season, to complete the first comeback after being down 3-1 in the NBA Finals only made it even sweeter.

Irving has had his challenges with health and finding his voice in Boston and Brooklyn since, but that shot will resonate loud and clear in Cleveland forever.

Before considering the majesty of Allen's shot, it's good to point out two moments that set it up, one incredible and the other sublime. The first came about 15 seconds of game time earlier, just before LeBron James made a 3-pointer to cut the Spurs' lead to two. Boris Diaw and Kawhi Leonard had a friendly fire rebound they lost that gave James a second chance after a brick. It's amazing that neither Diaw or Leonard got the loose ball. Watching the frame-by-frame replay is stupefying. There are three Spurs hands there, two of them Leonard's, some of the biggest hands the NBA world has ever seen. Somehow none of them secure the ball. It's a 99-of-100 rebound, championship over. Forget the missed free throws, that's the hardest moment to swallow for the Spurs.

The second is Chris Bosh's pass. People remember his rebound, and it was indeed ferocious. But the pass -- backhanded, diagonal and in the perfect shooting position for moving target Allen -- made the symphony of motion work.

As for the shot itself, it's the most iconic shot from the most iconic 3-point shooter in league history. Allen was born to hit that shot, not just because it was a 3 but because it was a product of muscle memory from repetition. Part of his legendary practice routine was backing out of rebound position to the corner after an offensive rebound. Sometimes, for whatever reason, he'd lie down in the lane and scramble to his feet before backing out to the corner. He did it over and over through the years. He knew from the block to the 3-point line was six steps. He didn't have to look down, he didn't have to measure. He'd already long since done the work.

The historic stakes for the Chicago Bulls were established long before Game 6 of the 1998 NBA Finals. Phil Jackson was on his way out as head coach, Scottie Pippen's relationship with the organization had frayed, and it seemed possible -- maybe even likely -- that Jordan would announce a more permanent second retirement at age 35.

Across their six championship runs, the Bulls never faced an elimination Finals game, but they were staring at the possibility of playing Game 7 on the road when John Stockton's 3 gave Utah an 86-83 lead with 41 seconds remaining. Then Jordan took over. First, after a timeout, he beat Bryon Russell off the dribble for a layup. At the other end, Jordan surprised Karl Malone to steal the ball off a post up.

With Chicago down one, Jordan isolated against Russell and dribbled the clock under 10 seconds before making his move. He drove right, got Russell off balance and either guided him to the ground or pushed off, depending on your perspective. Jordan pulled up for the go-ahead shot, which splashed through the net with 5.2 seconds left as he held an exaggerated follow-through.

"Who knows what will unfold in the next several months," intoned NBC broadcaster Bob Costas, "but that may have been the last shot Michael Jordan will ever take in the NBA."

It wasn't, alas, but it was Jordan's last shot in a Bulls uniform and -- after Stockton missed a 3 at the other end -- served as a fitting conclusion to Chicago's dynastic run.

Earvin "Magic" Johnson craved adding new weapons to his arsenal each offseason. In the summer of 1986, following a bitterly disappointing loss to the Houston Rockets in the Western Conference finals, Johnson pestered teammate Kareem Abdul-Jabbar to teach him his sky hook. Abdul-Jabbar demonstrated the body angle, proper footwork, and -- most importantly -- how to initiate the sweeping motion far enough from the body so the shot could not be blocked.

Fast forward to Game 4 of the 1987 Finals at Boston Garden, and the Los Angeles Lakersare trailing by one with seven seconds left. A win for the Boston Celtics would tie the series and shift momentum their way. A loss on their hallowed parquet would likely be their death knell.

Michael Cooper inbounded the ball to Johnson, and 6-foot-10 Celtics power forwardKevin McHale flashed out to meet him. Johnson stutter-stepped past him as center Robert Parish slid over in pursuit. Larry Bird, sagging off Cooper, saw Johnson driving to the hoop and also hustled over to help.

In past years, Johnson would draw the defense, then drop a deft pass to Abdul-Jabbar or James Worthy. Not this time. Johnson unleashed his "junior, junior hook" -- a high arching, masterful offering over the outstretched arms of the best frontline in basketball that, as teammate Kurt Rambis would later note, "hung up there forever." Johnson's iconic shot dropped through, clinching the Lakers' victory, the eventual championship and his place among the greatest clutch scorers in postseason basketball history. 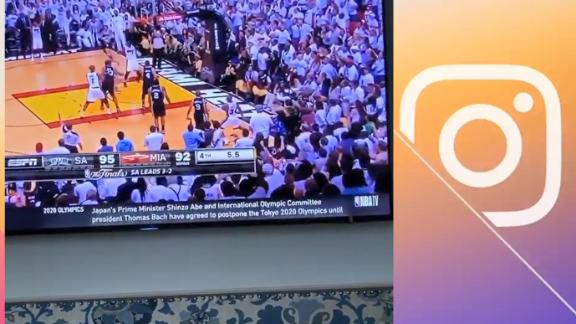 Ray Allen relives his remarkable Game 6 shot with his family
Ray Allen and his family re-watch his incredible game-tying 3-pointer in Game 6 of the 2013 NBA Finals. 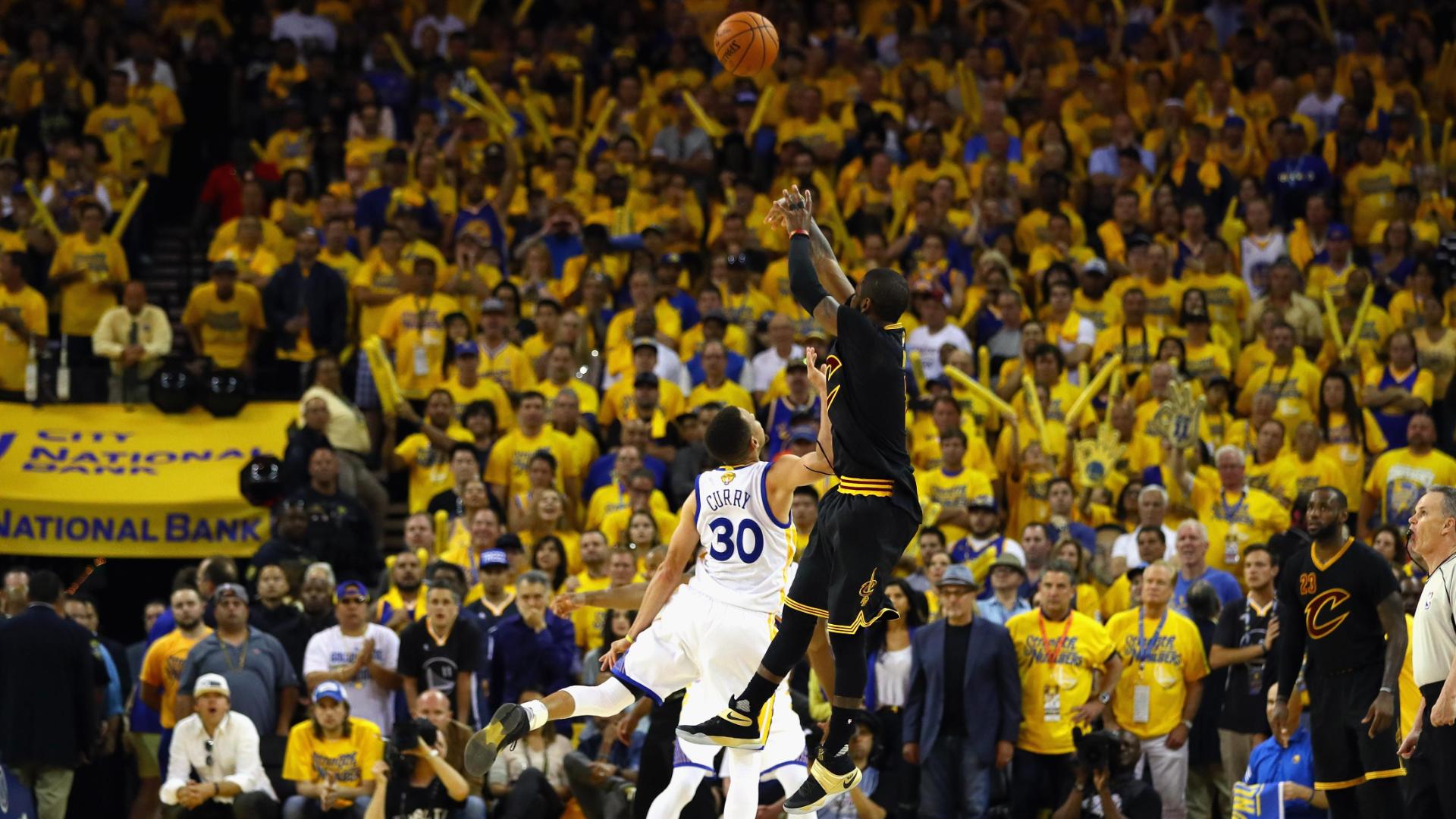 Kyrie drains winning 3-pointer in Curry's face
Kyrie Irving, with Stephen Curry in his face, knocks down a step-back 3-pointer with less than a minute to go in the game, and it turns out to be the winning shot for Cleveland. 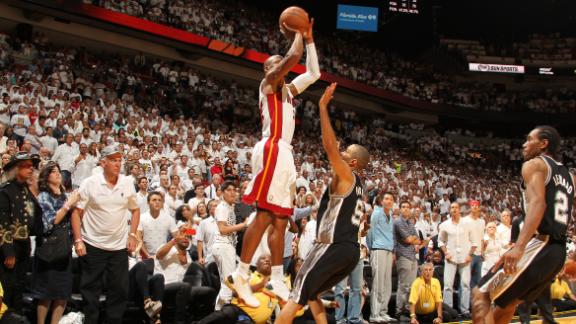 Ray Allen's clutch three for Heat in Game 6
On June 18, 2013, Ray Allen knocks down a corner 3-pointer to send the Heat to overtime against the Spurs in Game 6 of the NBA Finals. In OT, Chris Bosh blocks Danny Green's last-second shot attempt to send the series to a seventh game. 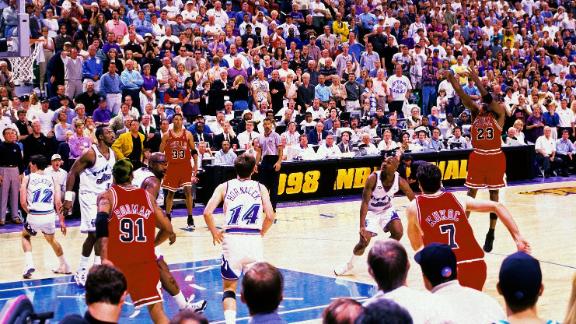 On this Date: MJ sinks jumper over Russell for 6th championship
Michael Jordan wins his sixth and final championship after hitting his step-back jump shot over Bryon Russell, which would be his final shot with the Chicago Bulls. 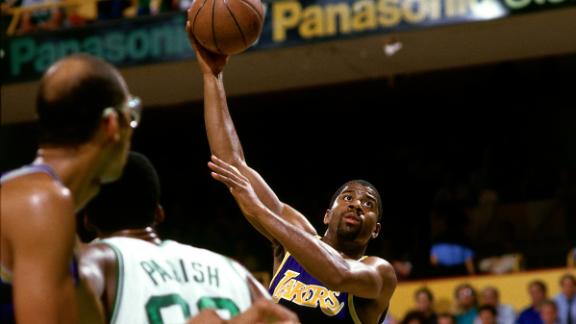