RB Fitz Toussaint on costly fumble: 'No excuse' for not protecting ball 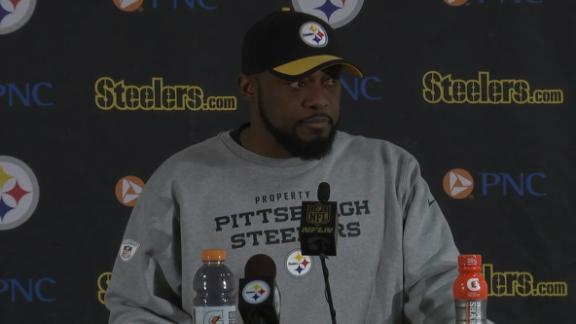 DENVER -- Mike Tomlin beelined to the corner of the locker room, where running back Fitz Toussainthad just finished his media interview, then gripped Toussaint's back with both hands for a supersized hug.

The Pittsburgh Steelers coach wasn't allowing Toussaint to play scapegoat after his fumble with 10 minutes left erased a promising Steelers drive and injected life into the Broncos in their 23-16 AFC divisional playoff win.

Tomlin was emotional while addressing several players. At one point, he huggedBen Roethlisberger in appreciation of the quarterback.

"I've been doing it for nine years," Tomlin said of his head-coaching career. "There's only one year where the conversation ended in the manner in which you want it to end. Such is life in this business. It's not easy, but we're built for it. It's just how it goes."

Toussaint seems built for it, too. He answered several questions from the media about an hour after his stomach-churning mistake. Toussaint tried to cut back when cornerback Bradley Roby popped the ball out from the front, and the Broncos converted the turnover into a 13-play touchdown drive that spanned nearly seven minutes. The Steelers had moved the ball 41 yards on the previous three plays.

Toussaint had helped elevate the Steelers past theBengalsin the AFC wild-card game with 118 total offensive yards. A few players encouraged him after Sunday's game, including Roethlisberger, who told him he is by his side and the Steelers lose as a team.

"I have to protect the ball. There is no excuse for that," Toussaint said. "Obviously, [I was] just going over and over in my head how I could have protected the ball a little bit more. They made a great play, so you have to give them credit. In that situation, though, I put it on myself."

Guard Ramon Fostersaid of Toussaint,who finished with 39 rushing yards and a 1-yard touchdown: "He's an NFL back ... I'm looking forward to seeing his growth."

The narrative is well-worn by now. The Steelers kept overcoming injuries to several players to win 11 games and advance to the AFC divisional round. This wasn't a team ready to play the hey-nice-season card. They felt they should have won. Antonio Brown,Le'Veon Bell, Maurkice Pouncey and DeAngelo Williams were among the star players missing time because of injuries.

"No one gave us a chance [in Denver]," guard David DeCastro said. "All year, we just kind of put our head down and went to work. I went on the TV, and they said no one's ever won without their leading receiver and running back. I was like, 'Whoa, we don't have a chance?' People are counting us out. I thought it was ours until the end there."

Tomlin: 'We came up a few plays short, such is life'
Steelers coach Mike Tomlin says he is proud of his team's effort in its loss to the Broncos and goes on to say how difficult it is to make it all the way to the Super Bowl, but his team is built for it.