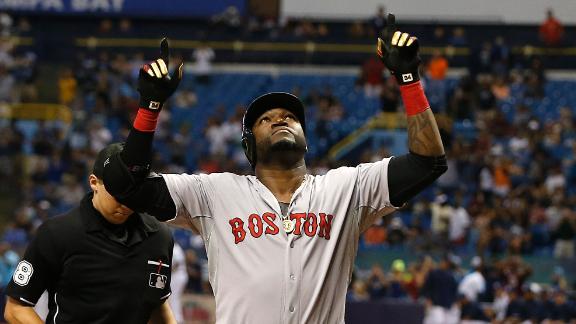 Ortiz hit No. 499, a three-run home run, in the first inning off Rays left-hander Matt Moore, driving a 1-2 fastball over the right-field fence. After popping out to short center field on a 3-0 pitch in the third inning, Ortiz led off the fifth inning against Moore, greeted by chants of "Let's go, Papi,'' and drove a 2-2 pitch into the seats.

Ortiz's teammates poured out of the dugout and the relief pitchers ran in from the bullpen to greet him after he jogged slowly around the bases, stepped on home plate, brought his fingers to his lips, and then pointed to the sky.

Ortiz, who is 10 weeks shy of his 40th birthday, achieved the milestone with a three-month power surge that has been matched only twice by a player of his age or older, Barry Bonds and Henry Aaron, over a full season. On June 10, Ortiz had just six home runs and was batting .219, a performance that invited wide speculation that his celebrated career was winding down. Among qualified designated hitters in the American League, Ortiz ranked last in most major categories.

"The guy, he's the best hitter I've seen for the Red Sox for a long time," Henry said at the time. "He's not in his prime. He's not going to hit 50 home runs. But is he going to hit 30? It doesn't look like it this year. Is he getting older? Yes. But I don't think any of us know [if the end is nearing]."

Even Ortiz revealed a sliver of doubt.

"Everybody's time is up at some point," he said. "I don't think that's my problem, though. I'll keep on trying like I normally do."

With 28 home runs in the span of just 273 at-bats, Ortiz erased all doubts that he will return in 2016 for his 20th season in the big leagues, the past 13 with the Red Sox. He joins Manny Ramirez, Jimmie Foxx and Ted Williams as Red Sox players who have hit 500 home runs, and Sammy Sosa, Ramirez and Albert Pujols as fellow Dominicans who have reached that threshold.

Ortiz also solidified his case for induction into baseball's Hall of Fame, a place which only this past year opened its doors to a second Dominican player, Ortiz's former Boston teammate Pedro Martinez, and has historically resisted the inclusion of designated hitters.

Ortiz may also encounter pushback from voters who have shown little enthusiasm for players who have been linked to performance-enhancing substances, keeping such great players as Bonds, Mark McGwire and Sosa, whose 609 home runs rank eighth on the all-time list, on the outside looking in.

Ortiz, perhaps mindful that the issue will be raised when his Hall of Fame candidacy is considered, declared his innocence in the strongest terms to date last March, in a piece entitled "The Dirt" that appeared under his byline on The Players' Tribune website.

"In some people's minds, I will always be considered a cheater," wrote Ortiz, citing a New York Times report in 2009 that cited him as one of the players who tested positive in 2003 for PEDs, a test that was supposed to be confidential. "And that's bulls---. Mark my words: Nobody in MLB history has been tested for PEDs more than me. You know how many times I've been tested since 2004? More than 80. They say these tests are random. If it's really random, I should start playing the damn lottery. Some people still think the testing is a joke. It's no joke. Ten times a season these guys come into the clubhouse or my home with their briefcases. I have never failed a single one of those tests and I never will."

In Boston, where Henry, Tom Werner and Larry Lucchino 10 years ago presented him with a plaque that said "The Greatest Clutch Hitter in the History of the Boston Red Sox, David Ortiz, #34," the allegations of PED use have not kept him from being lionized as one of the greatest athletes in the city's rich sports history. That puts him in the select company of such beloved icons as Larry Bird, Bobby Orr, Ted Williams, Bill Russell, Carl Yastrzemski, Martinez and Tom Brady.

As a hitter, Big Papi has proved a worthy successor as slugger to the Splendid Splinter, as Williams was known. This is his ninth season with 30 home runs or more, passing Williams for most in Red Sox history.

But like Russell, Bird, Orr and Brady, Ortiz will be remembered for delivering championships, three World Series titles in the span of 10 years for a team that had gone the previous 86 years without winning one.

His career can be bookended by signature performances in the 2004 postseason, in which he had three walk-off hits, the most ever by a player in a single postseason. Two of those walk-off hits came on the same calendar day. Ortiz hit a 12th-inning home run off Yankees reliever Paul Quantrill at 1:22 a.m. ET to end Game 4 of the AL Championship Series, and less than 23 hours later delivered a 14th-inning single off Esteban Loaiza in the 14th inning of Game 5.

The Red Sox became the first team in baseball history to rally from a 3-0 deficit and win a postseason series.

Then, in 2013, Ortiz led all postseason hitters with a .500 OBP, a .706 slugging percentage and a 1.206 OPS, hitting five home runs in 16 games, capped by a near-record-setting World Series performance in which he batted .688 (11-for-16) and reached base in nine consecutive plate appearances. He was named World Series MVP.

On June 11, 2015, Ortiz launched an eighth-inning home run off Orioles reliever Chaz Roe in a 6-5 loss in Baltimore. No one could have known it at the time, but Ortiz, who earlier this season had said his home runs were "like bananas, they come in bunches," was about to go off on one of the greatest power displays of his career.

Beginning with that home run off Roe through the home run he hit off Phillies rookie Jerad Eickhoff over the Red Sox bullpen last Sunday at Fenway Park, Ortiz hit 25 home runs in 255 at-bats, a ratio of one home run per 10.2 at-bats.

Only nine players 39 or older have hit 30 home runs in a season, with Alex Rodriguez of the Yankees preceding Ortiz to that mark earlier this month. Only three players -- Bonds, Aaron and Darrell Evans -- have hit 30 or more past the age of 40.

Ortiz, who has hit at least 25 home runs in a season 11 times for the Red Sox, will have a chance to join their company in 2016.

Yastrzemski, who played 23 seasons for Boston and has both 3,000 hits and 500 home runs to his credit, nevertheless defers to Ortiz as the team's greatest hitter, behind only Williams. On July 31, the day his close friend Martinez was inducted into the Hall of Fame, Ortiz hit two three-run homers and drove in seven runs.

A preamble to his own induction?

"As long as David stays healthy and is capable of producing, as he's done for so many years,'' manager John Farrell said, "with each passing day the probability of him getting in continues to increase."