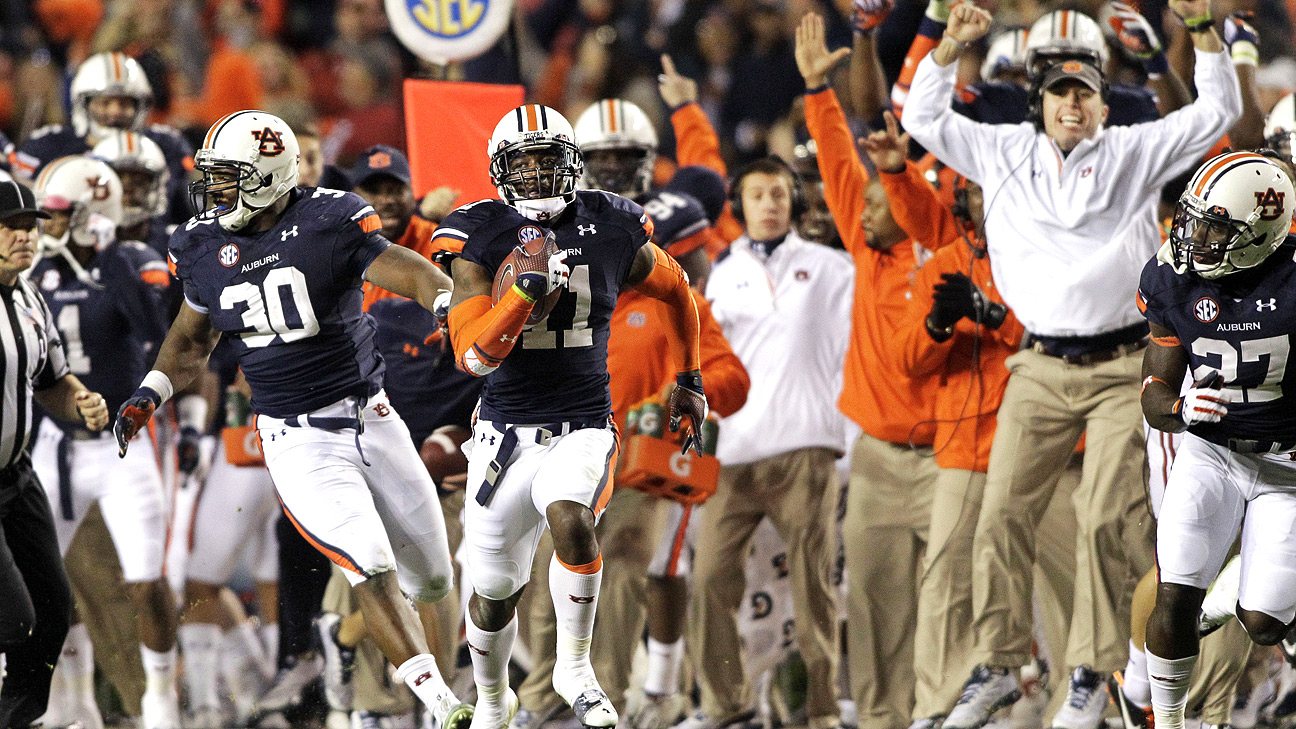 Editor's Note: To enjoy a classic game from a classic rivalry, check out the 2016 Michigan vs. Ohio State game at 7 p.m. ET on ESPN and the ESPN app.

It is a custom at certain addresses on an autumn Saturday in the streets surrounding the Loveliest Village on the Plains to fly two flags: the Auburn flag, and the Whoever-Is-Playing-Alabama flag.

Emotion is the mother's milk of rivalries. Because of the stakes, nerves are tauter, glances are quicker, memories are longer. And what are the stakes, exactly? Us beating them, since the dawn of time, at every rung on the evolutionary ladder.

As we assess the best rivalry plays of the BCS/College Football Playoff era, we must take into account how much venom the rivals have stockpiled for one another through the ages, and how plays inflict sufficient enough pain that both sides remember them forever, only one side with a grin.

Need you ask? The last play of Auburn's 34-28 victory over Alabama will live for as long as orange and blue clash with crimson and white. It's not just the Kick Six -- Chris Davis' 109-yard return of Adam Griffith's 57-yard field goal attempt -- but how that play came about. Nothing happens if Tide coach Nick Saban doesn't win his appeal for the final second to be put back on the clock. Be careful of what you wish for, indeed. The final margin even has the telltale six-point margin that tells you: walk-off touchdown.

The Buckeyes trailed 27-24 in the bottom half of the second overtime. On fourth-and-1 at the Michigan 16, Urban Meyer chose a quarterback sneak over an unreliable kicker. Whether the nose of the football held by J.T. Barrett reached the painted stripe is impossible to know, but line judge Brian Bolinger said it did, referee Daniel Capron announced that it did, and the video review couldn't overturn it. Curtis Samuel scored the winning touchdown on the next snap. Michigan coach Jim Harbaugh complained about the officiating. Capron complained about the camera placement. And so far, no one at Ohio State has complained about a thing.

Oklahoma clung to a 7-3 lead late in 2001. That's right, boys and girls: A long time ago, before the spread and before up-tempo offenses, defenses would dominate for 60 full minutes. Coach Bob Stoops sprung what amounted to a quick kick, a surprise punt that pinned Texas at its 3-yard-line with 2:06 to play. On first down, Sooners safety Roy Williams blitzed, leapt over his blocker and crashed down on quarterback Chris Simms as he threw. The ball wobbled forward, right to linebacker Teddy Lehman, who snatched it and took a couple of steps into the end zone. Oklahoma won 14-3, Williams having written himself (and Simms) in permanent ink in the Sooners' Family Bible.

The 2002 Washington Huskies might have been 5-5, but they knocked off No. 3 Washington State 29-26 in three overtimes on a play that still raises the ire of Cougars fans everywhere. On the first play of the bottom half of the third overtime, Washington defender Kai Ellis batted down the screen pass of Washington State quarterback Matt Kegel and then fell on the ball. The Cougars and their home crowd began thinking second down. The Huskies ran onto the field thinking celebration, believing that the screen had been a backward pass and, thus, a live ball. The officials huddled, and referee Gordon Riese announced for the Huskies. Game over. Q: When does going to the Rose Bowl not cure all ills? A: When you lost the Apple Cup on a game-ending judgment call.

Bo Wallace took off through a hole you could drive an SUV through. The Ole Miss quarterback was no SUV, but he could run, and on first-and-goal from the 11, with Mississippi State ahead 17-10 in the bottom half of the first overtime, it looked as if the Egg Bowl would go back to the 25-yard line for the second extra period. But free safety Nickoe Whitley had another outcome in mind. He clamped on Wallace's right arm and yanked. The ball shot out of Wallace's grasp at the 3-yard-line and danced into the end zone, right into the arms of cornerback Jamerson Love. In the course of one play, Ole Miss fans went from tension to anticipation to excitement to incomprehension to plain ol' horror. In the course of seven years, Bulldogs fans remain stuck on jubilation.

In December 2006, USC went to the Rose Bowl for the first time since losing that epic BCS Championship Game to Texas 11 months earlier. USC remained a prohibitive favorite to beat UCLA. The No. 2 Trojans were 10-1, the Bruins 6-5, not to mention that USC had beaten UCLA 66-19 a year earlier. Yet UCLA led 13-9 when Bruins backup linebacker Eric McNeal, who just may have been out of position, tipped a John David Booty pass near the line of scrimmage, then caught it as he fell at the UCLA 20 with 1:10 to play. There went USC's chance to play for the national championship for the fourth consecutive year. From 1999 through 2011, McNeal's pick is the only play that sealed a Bruins victory over the Trojans.

The long, sad history of the Seminoles losing to the 'Canes because of a missed field goal -- five times in 13 seasons from 1991 through 2003 -- serves as the historical backdrop for the 2016 game. DeMarcus Walker blocked a Miami extra point attempt with 1:41 to play to preserve Florida State's 20-19 upset of the No. 10 Hurricanes. For a Florida State team that had lost earlier that season to Louisville and its spectacular quarterback, Lamar Jackson, knocking off the unbeaten Hurricanes and extending a series winning streak to seven couldn't have felt better. Speaking of long, sad history: This four-year-old game is the last time both teams in this once-great rivalry entered the game in the top 25.

Midway through 2011, Jerry Kill's first season as coach at Minnesota, the Gophers struggled so badly that the fans cheered the scoreless first quarter against Iowa. With 13:51 to play, Iowa led 21-10 and it looked as if Minnesota would fall to 1-7. But the next time Iowa took a snap, the Hawkeyes trailed 22-21 and only 2:48 remained to play. The Gophers went on an 11-play, 80-yard drive to score a touchdown, and followed it with a 12-play, 59-yard drive for another touchdown, MarQueis Gray's fourth-and-3 sprint to the right pylon. Total elapsed time of the two drives: 11:03. Gray's touchdown hurt, but the play that still gnaws at the Hawkeyes came after that first touchdown drive, when sixth-year senior safety Kim Royston recovered Jordan Wettstein's onside kick.

Arizona never trailed Arizona State in 2009, and yet you could feel the game slipping away. The Wildcats led 14-0 at the half and 17-10 with 2:30 to play, and yet, here it was, 17-17 with a minute and change left, and Arizona had to punt to the Sun Devils. Back deep waited senior Kyle Williams; all Williams had done was catch both Arizona State touchdowns and return a punt 53 yards to set up the Sun Devils' third-quarter field goal. But Williams muffed the punt, the Wildcats' Mike Turner recovered it at the Arizona State 22, and as time expired, Alex Zendejas kicked the winning 32-yard field goal. Arizona State lost three games that season on a game-ending field goal. No need to guess which one stings to this day.

Prelude I: In 1968, Harvard scored a touchdown and 2-point conversion, recovered an onside kick, and did it again to "beat" Yale 29-29. Prelude II: From 2001 to 2015, the Bulldogs defeated the Crimson once. Last November, when all that stood between Yale and a share of the Ivy League championship was 4-5 Harvard, no one thought it would be easy. The Crimson dominated the first 3 quarters of the game and carried a 36-22 lead inside the 2-minute mark. But Yale scored with 1:28 to play, Sam Tuckerman executed a picture-perfect onside kick, and with bodies strewn across the right side of the field, senior wideout Reed Klubnik stood up holding the ball. The Bulldogs scored again, and scored touchdowns in each of the two overtimes to win 50-43. It took 51 years, but Yale, yes, evened the score. 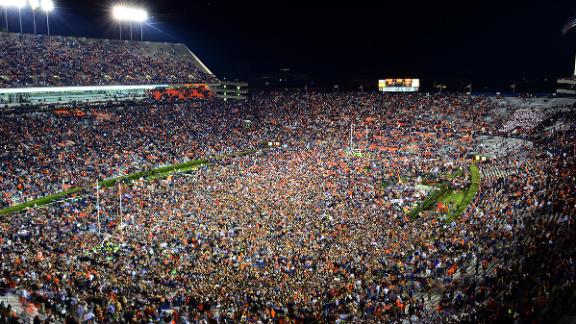 2013 Iron Bowl unforgettable because of 'Kick Six'
The 2013 Auburn-Alabama game was decided by one of the most famous plays in college football history: "The Kick Six." 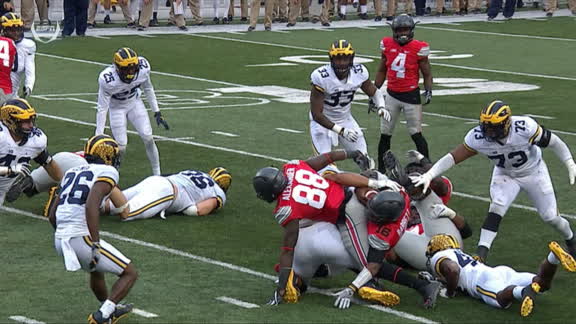 Ohio State extends game on fourth-down gain
J.T. Barrett runs for a 1-yard gain to the Michigan 15 for a first down. 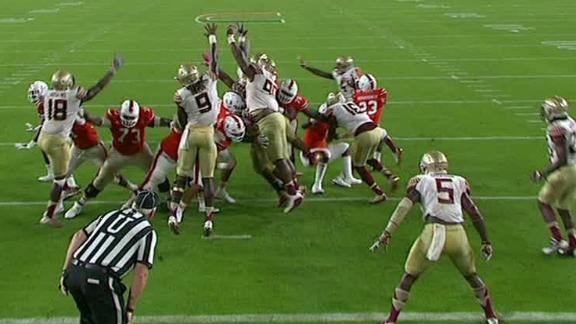 FSU prevents Miami from tying game with blocked PAT
After Hurricanes WR Stacy Coley catches an 11-yard touchdown, Florida State blocks the extra point attempt as the Seminoles hold on to a 20-19 lead. 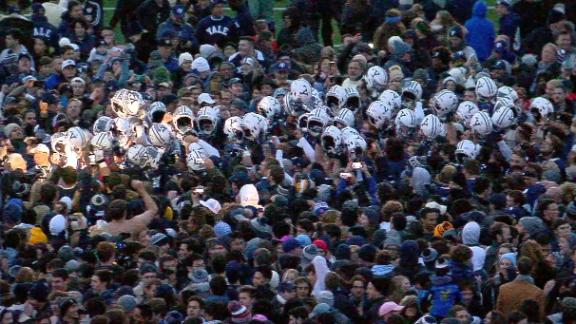