Report: Andrew Wiggins to be named NBA rookie of the year 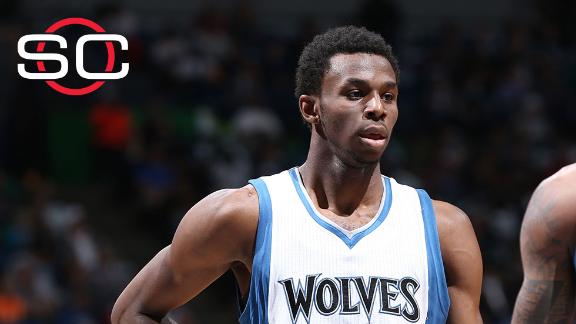 MINNEAPOLIS -- Andrew Wiggins started his NBA career at the front of his rookie class. He finished his first season there, too.

The Minnesota Timberwolves' forward will be named rookie of the year on Thursday, a person with knowledge of the announcement told The Associated Press on Wednesday night. The person requested anonymity because an official announcement has not been made.

While so many of his teammates -- and his fellow members of the class of 2014-15 -- went down with injuries that kept them out of action for months, Wiggins kept coming to work. Every game. Every day.

"I don't want to hear anybody saying there is anyone close to him," Timberwolves teammate and fellow rookie Zach LaVine said at the end of the season. "He had the best rookie year by far."

Wiggins averaged 16.9 points and 4.6 rebounds while playing all 82 games as a rookie and averaged 39 minutes per game for a team that was routinely missing five, six, even eight players a night to injury over the last four months.

"It's a tough league. It's hard to play every game," Wiggins said at season's end. "I feel proud of that."

Wiggins was the No. 1 overall pick by the Cavaliers last June, but was traded to the Timberwolves in August in the deal that sent disgruntled star Kevin Love to Cleveland. He won the first four Western Conference rookie of the month awards to make himself the prohibitive favorite to be named rookie of the year.

Philadelphia's Nerlens Noel, Chicago's Nikola Mirotic and Orlando's Elfrid Payton closed the gap as the season wound down, but not enough to overtake the dynamic Wiggins.

"I don't even know who else would be in the conversation (for the award)," Golden State coach Steve Kerr said in February. "He's going to be an All-Star. He's a terrific player, a good talent and it looks like he's figuring out the NBA game. He's really going to be a good player."

After finding his way through the first month of the season, Wiggins took off. As teammate after teammate went down, more responsibility fell on to Wiggins' shoulders. Forced to become a focal point at 19 years old, he responded by becoming more assertive and more aggressive on both ends of the court than he ever was in his lone season at Kansas.

His dunks over Utah center Rudy Gobert and New Orleans big man Omer Asikin the final month of the season were highlights for a team that finished an NBA-worst 16-66.