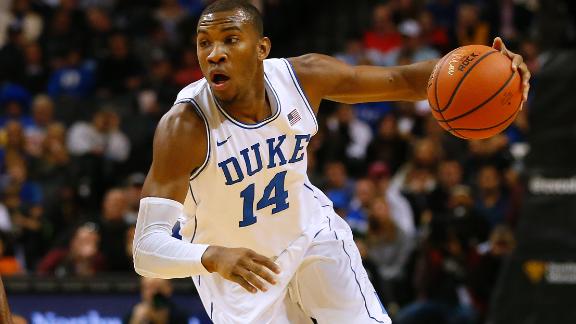 Duke men's basketball coach Mike Krzyzewski and the university on Monday declined specific comments on a report that Rasheed Sulaimon, who was dismissed from the team in January, was alleged to have sexually assaulted two women during the 2013-14 academic year.

Krzyzewski dismissed Sulaimon from the team Jan. 29, saying the junior guard "repeatedly struggled to meet the necessary obligations." Sulaimon is the first player dismissed from Duke's team under Krzyzewski.

According to the report, published Monday in the Chronicle, the Duke student newspaper, Sulaimon was accused of sexual assault by two women, who told others of the incidents but did not file complaints with Duke's Office of Student Conduct or the Durham Police Department.

Sources told the Chronicle that officials in the athletic department, including Krzyzewski, knew about the allegations as early as March 2014 -- 10 months before Sulaimon was dropped from the team.

On Monday, Krzyzewski, participating in an ACC coaches' conference call, was asked whether he was aware of the report and whether he thought he handled it the right way. In all instances, Krzyzewski responded: "I don't have any comment on that."

"Duke is prohibited by law from disclosing publicly any particular student's confidential education records," the statement said. "The university takes immediate action when it receives reports of alleged sexual misconduct or other violations of the student conduct code, which includes investigation and referral to the Student Conduct Office for review in a timely manner as required by law. Duke also takes every possible action internally to ensure anyone who raises a complaint of sexual misconduct is supported and the campus community is safe."

Sources close to the two women told the Chronicle that the women did not pursue school or legal action against Sulaimon because they feared reprisal from Duke's fan base.

Neither accuser would discuss the allegations with the newspaper.

Attempts to reach Sulaimon were unsuccessful. A lawyer claiming to represent Sulaimon told the Chronicle he believed the allegations to be false.

Sulaimon is still a student in good academic standing at Duke, according to the newspaper.

The first allegation came in October 2013, according to the newspaper. A female student told a large group at a student-led diversity retreat called Common Ground that Sulaimon sexually assaulted her, according to three participants in the retreat. In February 2014, at a second Common Ground retreat, a second female student said she had been sexually assaulted by Sulaimon, four participants told the Chronicle.

A source, described as a former affiliate of Duke's basketball program during Sulaimon's playing days, became aware of the allegation in fall 2013 and spoke to the accuser. The same person spoke to the second accuser after becoming aware of her allegations.

The source said the allegations were brought to the attention of a team psychologist in March 2014, and later that month they were brought to Krzyzewski, assistants Jeff Capel, Jon Scheyer and Nate James, and other athletic department officials, including athletic director Kevin White and Sue Wasiolek, assistant vice president of student affairs and dean of students.

"Nothing happened after months and months of talking," the source told the Chronicle.

Sulaimon averaged 7.5 points and 2.0 rebounds in 20 games for Duke this season, all of them in a reserve role. He was a starter during his freshman year in 2012-13, averaging 11.6 points per game.