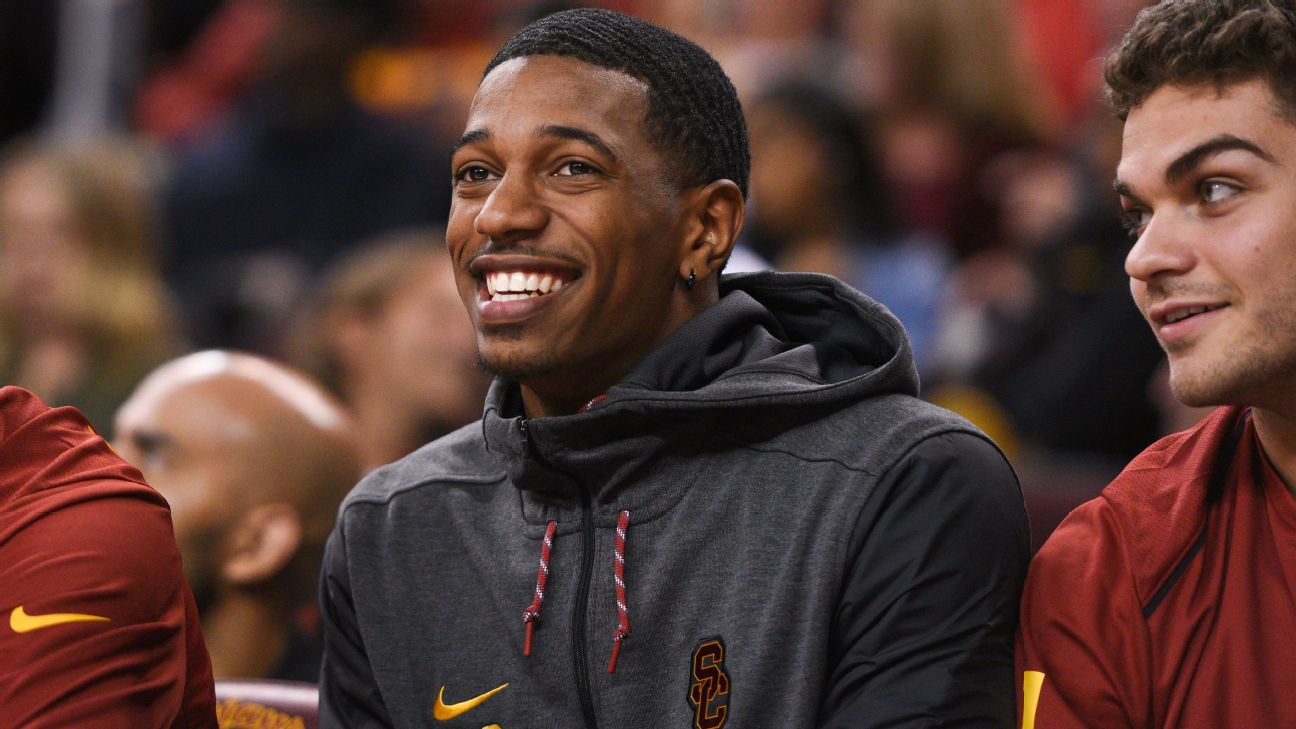 HOUSTON -- The Rockets believe they got a steal by adding USC's De'Anthony Melton with the 46th pick in the NBA draft on Thursday night -- and they aren't worried about his off-court headlines.

Melton was drafted by the Rockets following a season in which he was ruled ineligible because of an extra benefits scandal.

"He's a guy that if he had played we feel pretty comfortable that he would have been a top-20 pick,'' general manager Daryl Morey said. "So that's why we were really happy to get him there. I think he was a little out of sight, out of mind.''

Houston also added Purdue forward Vincent Edwards in a trade for cash with Utah after the Jazz selected the senior with the 52nd pick.

"We feel like both these guys are not too far from potentially contributing for us,'' Morey said.

USC never had Melton in the lineup last season because of eligibility concerns tied to a sprawling college basketball corruption case. The 6-foot-4 Melton, who started 25 games as a freshman and averaged 8.3 points, 4.7 rebounds and 3.5 assists, sat out after an investigation by the FBI alleged that a friend of Melton's family accepted $5,000 to influence Melton to sign with a certain agent and financial adviser when he reached the NBA.

His eligibility first came into question when USC's Tony Bland was one of four assistant coaches around the country accused of taking bribes to influence players to sign with certain agents, advisers and apparel brands. Bland was arrested and has pleaded not guilty to four charges concerning bribery and wire fraud.

"Obviously we have to do our homework and look into everything,'' Morey said. "That was something we were extremely comfortable that was not an issue.''

After leading his high school to consecutive state titles, Melton averaged 8.3 points, 4.7 rebounds and 3.5 assists as a freshman in the 2016-17 season. Scouts see him as a solid defender who needs to develop offensively.

Melton and Edwards will join a team led by James Harden and Chris Paul that won a franchise-record 65 regular-season games but was eliminated by the eventual champion Golden State Warriors in Game 7 of the Western Conference finals.

Paul and center Clint Capela lead a group of free agents the Rockets will work to re-sign. Houston is also expected to make a play for LeBron James, but NBA rules kept Morey for commenting directly on any potential free agent targets.

"This was really about setting up our future but it doesn't affect free agency,'' Morey said of the draft. "Now we shift our focus to free agency. And the challenge of upgrading a very good team is not easy, so we're going to have to be aggressive.''

The 6-foot-8 Edwards was named second-team All-Big Ten after averaging 14.6 points, 7.4 rebounds and 2.9 assists a game last season. He shot 39.8 percent from 3-point range and was an 83.3 percent free throw shooter last season.

Edwards joined Michigan State's Denzel Valentine and Tulane's Jerald Honeycutt as the only three players in the last 25 years to finish their college careers with at least 1,600 points, 750 rebounds, 400 assists and 170 3-pointers.

"He sort of can do it all,'' Morey said. "He can defend multiple positions. He really fits our style of play ... one thing unique about him is he can handle the ball and pass at his size and he's already an accomplished shooter.''
Report a correction or typo
Related topics:
sportsespnpurdue boilermakersnba draftdeanthony meltonhouston rocketsnbausc trojansvince edwards
Copyright © 2020 ESPN Internet Ventures. All rights reserved.
More Videos
From CNN Newsource affiliates
TOP STORIES