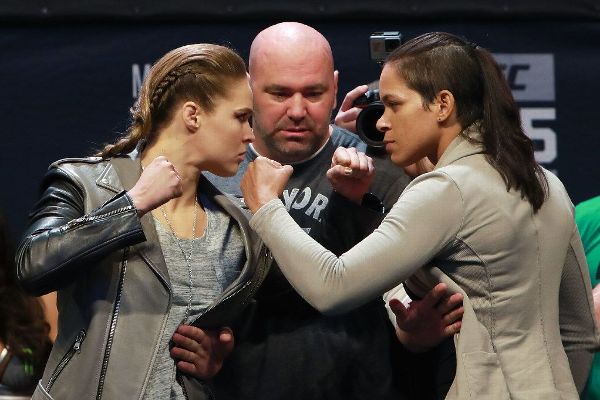 Ahead of a comeback fight at UFC 207 on Friday, former UFC champion Ronda Rousey will not be taking part in traditional fight week media appearances.

Rousey (12-1) will face defending bantamweight champion Amanda Nunes in the main event of UFC 207 next week inside T-Mobile Arena in Las Vegas.Rousey told ESPN the Magazine in an article last week that she negotiated the terms of her obligations directly with UFC president Dana White in advance of committing to the fight.

According to the UFC's official fight week schedule, Rousey will not appear at an "Ultimate Media Day" on Dec. 28. The promotion also has eliminated its fight week news conference and public open workout. Nunes (13-4) is also absent from the media event.

"I was just trying to make too many people happy," Rousey said about past media blitzes for fights. "But when I try and do favors and make everybody else happy, at the end of the day, they walk away happy and I'm the one who has to deal with the depression. All the pay-per-views in the world, all the money in the world, it means f---ing nothing to me because I lost."

Rousey, 29, hasn't fought since she suffered her first professional loss to Holly Holm via knockout in November 2015. She has been mostly away from the public eye since the loss and has not promoted UFC 207 outside a handful of appearances, including "Ellen" and "Conan."

"Everybody knows how I feel about Ronda," White said. "She worked harder than anybody for years, and she needed a break. Now that she's coming back, I'm kind of letting her do it on her terms."

In the ESPN The Magazine interview, Rousey explained the agreement with the UFC to make fewer public appearances than usual. The agreement included several high-profile interviews, a day of filming at her gym for a commercial, and one stare-down with Nunes in New York last month.She later agreed to film a promotional video for the UFC, which was released this month.

Rousey appeared for that stare-down inside Madison Square Garden, but did not speak. White later said it was agreed she wouldn't grant an interview.

It's an interesting development, given the UFC's rift with Irish star Conor McGregor earlier this year. The UFC pulled McGregor from a headlining role at UFC 200 against Nate Diaz when he refused to fly to Las Vegas for a prefight news conference in April. McGregor ended up fighting one month after UFC 200 at UFC 202.

Rousey told ESPN that she advised McGregor to negotiate his pre-fight media obligations in advance, when she saw him in person a month after he was dropped from the UFC 200 card for failing to attend the news conference.

"Instead of trying to handle everything at once, while it's coming at you, just trying to reach an agreement beforehand," Rousey said she told McGregor.