WPVI
HOLIDAY, Fla. -- Roy Halladay, a two-time Cy Young Award winner who pitched a perfect game and a playoff no-hitter, died Tuesday when his private plane crashed into the Gulf of Mexico. He was 40.

The crash happened around noon on Tuesday. The Pasco County sheriff's office marine unit responded to the downed plane and found Halladay's body. No survivors were found.

Sheriff's officials couldn't confirm if there were additional passengers on the plane or say where it was headed or why it crashed.

The Philadelphia Phillies released the following statement upon word of Halladay's death:

"We are numb over the very tragic news about Roy Halladay's untimely death. There are no words to describe the sadness that the entire Phillies family is feeling over the loss of one of the most respected human beings to ever play the game. It is with the heaviest of hearts that we pass along our condolences to Brandy, Ryan and Braden."

Halladay, who played for the Toronto Blue Jays and the Philadelphia Philies, tweeted frequently about his love for flying.

I have dreamed about owning a A5 since I retired! Real life is better then my dreams!! Thx Kirk & everyone @ICONAircraft pic.twitter.com/wkk6TtjAY4

What do clouds feel like? I didn’t know either until I got my new Icon A5! I’m getting bruises on my arms from constantly pinching myself! pic.twitter.com/BaObEUj3Xo

Can’t begin to explain all the breathtaking views I have seen thru the open windows of demo’s & now my very own Icon A5! Thx to all at Icon! pic.twitter.com/BZsXqcHFmt

Harry Leroy Halladay III, affectionately known as "Doc," was one of just six pitchers to win the Cy Young Award in both leagues.

Halladay pitched a perfect game on May 29, 2010, beating the Florida Marlins 1-0. In his first-ever postseason start later that season, Halladay threw the second no-hitter in MLB postseason history against the Cincinnati Reds in Game 1 of the NLDS. 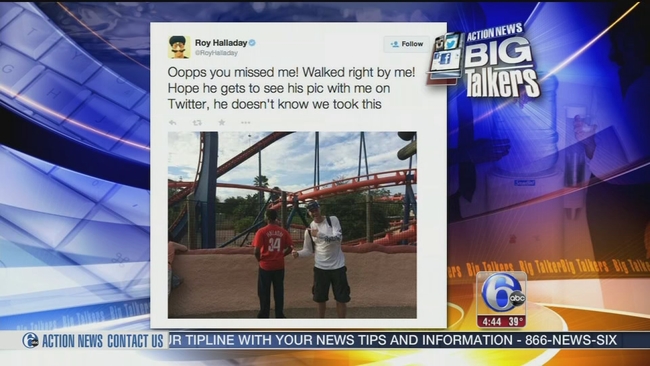