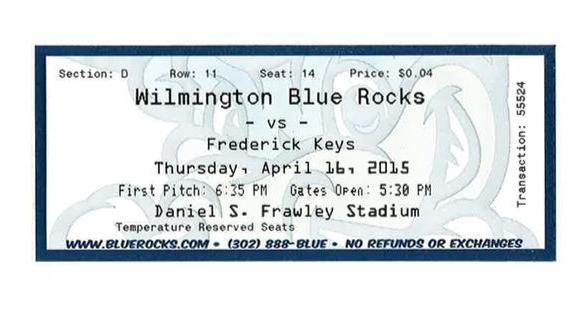 The Wilmington Blue Rocks sold some of the cheapest tickets in baseball history Monday -- with an assist from the cold weather -- as they discounted regular prices by 99 percent.

The Class A affiliate of the Kansas City Royals offered fans the chance to get tickets to Opening Day for the same number, in cents, as the temperature at 8 a.m. ET.

The temperature in Wilmington, Delaware, at that time Monday? Four degrees Fahrenheit.

"It's really cold here, and we want to get the fans thinking about us," said Stefani Rash, the team's director of tickets.

Fans had three ways to get 4-cent tickets to Opening Day, an April 16 matchup against the Frederick Keys. They could show up in person (which many did, as Monday was the first day individual tickets went on sale), call the box office or order online. Orders by phone and the Web, however, were charged a $5 handling fee.

Rash said the team sold about 3,600 Opening Day seats, and more than 200 fans took advantage of the chance to buy up to eight tickets for 32 cents total. The team usually sells $6 tickets for general admission and $11 for field box seats.

It's the second year that the Blue Rocks have held the promotion. Last year, the price was 20 cents.

Although the team leaves money on the table in the short term, the promotion ensues that fans sample the ballpark on the first day it opens, Rash said.

As the bitter cold reached a new level last week, Rash wasn't sure her department would make any money from the promotion.

"We told fans if it was zero or below, we'd give tickets out for free," she said.

Twelve players on the Kansas City Royals' World Series roster last year at least stopped in Wilmington on their way to the majors.