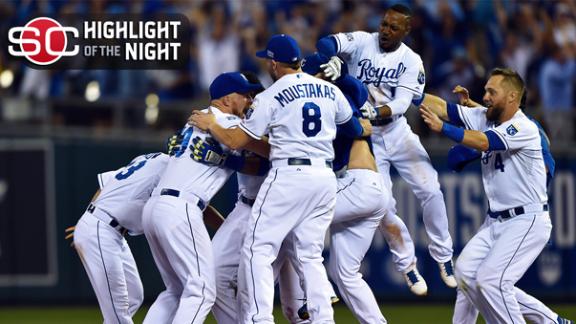 Postseason fever, for the first time in nearly three decades, is getting expensive. But Kansas City Royals fans are apparently willing to pay what it takes to get into the building.

Game 3 of the American League Division Series, the first home game for the Royals against theLos Angeles Angels, is the most expensive playoff game in the next round, according to data released by secondary ticket market firm StubHub.

As of Wednesday afternoon, the average price of a ticket for Game 3 sold for $211, and only kept climbing after the Royals' thrilling 12-inning, 9-8 victory in the wild card game against the A's on Tuesday. At 8 a.m. ET on Wednesday morning, a standing room ticket to the game could be had for $145. Twelve hours later, the cheapest standing room ticket was $70 more ($215). No other division series game currently has a get-in price of over $100.

Some of the rise in prices has to do with pent-up demand from the fact that the Royals just earned the right to play in their first postseason series since the 1985 World Series. Steve Shiffman, senior director of ticket sales and customer service for the Royals, said that the supply to the resale market is fewer tickets than other markets because fans who have them aren't parting with them as easily.

"This is a diehard community," Shiffman said. "They don't want to miss this."

Patrick Ryan, co-owner of the The Ticket Experience, a Texas-based ticket brokerage that is one of the Royals' largest accounts, said that in his eight years of selling tickets he has never seen the rise in demand that he has for the Royals.

"I'm baffled," Ryan said. "Some ticket prices are selling for triple what they sold for at the end of the regular season."

Ryan said a woman called his brokerage last week asking for the ticket price to the wild card game.

"When we told her $150, she hung up and moved on," Ryan recalled. "I think she thought it was too expensive. A couple days later, she called back, and when I said it was now $300, by then she realized she should buy it, and she did."

Ryan said, given how long it has been for Kansas City baseball, the ticket prices come down to one major factor: FOMO.

"It's an acronym that has picked up traction in social media," Ryan said. "It means Fear Of Missing Out. A lot of people decided they had to be there on Tuesday night and now they're doubling down and making sure they get to Game 3."