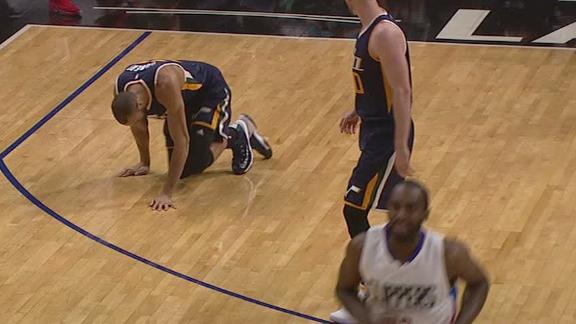 LOS ANGELES -- An MRI on Saturday night revealed no structural damage toJazzcenterRudy Gobert's left knee, and he was diagnosed with a hyperextension and bone contusion, the team announced.

The injury puts Gobert's status for the rest of the series in question, sources told ESPN.

Gobert, the defensive anchor of Utah's third-ranked defense, collapsed to the floor less than 20 seconds into Saturday's playoff opener against theLA Clippersafter banging knees with Luc Mbah a Moute as the Clippers forward was navigating around Gobert's screen.

Forward Derrick Favors entered the game for Gobert, who leaned heavily on teammatesas he made his way to the locker room.

"We're not sure what the situation is with Rudy yet," Jazz coach Quin Snyder said after his team won Game 197-95onJoe Johnson's buzzer-beater. "It would be nice to get him back, obviously. Unfortunate for him as much as anyone if he can't come back because I know how much he was looking forward to competing."

Jazz shooting guard Rodney Hood had a similar diagnosis of knee hyperextension and a bone bruise in January and initially missed five games over a 12-day span.

"I think we should feel that we can win without Rudy," Snyder said. "At the same time, it's a long series, and we have to be resilient and continue to believe in that. That's what we need to do, and obviously tonight was a big win for our group."

Asked if seeing Gobert go down motivated the team, Johnson replied, "I think it was very motivating considering the fact that he's a big part of what we do, especially defensively.

"You know, I think we felt and knew that a lot of people probably were counting us out when he went down, but man, we stuck together, fought hard for 48 minutes; we had ups and downs, but at the end of the day we came out with a win."

Said Jazz big man Boris Diaw: "I think we took a hit for a couple of minutes. When someone from your team goes down and won't be able to be with you, that's something that we felt for the first couple of minutes. But then we regrouped and got back on the horse and played the rest of the game."

"I was just coming off a screen," Mbah a Moute said after the game when asked about the collision with Gobert. "I saw him go down. I didn't know what happened."

"All credit to them. [Gobert] is a big part of what they do, and they were able to get the win without him," Mbah a Moute continued. "Obviously, it shows they can still be a really good team without him. We've got to figure out how they were able to take advantage of us and try to correct it for [Game 2]."

The Jazz and Clippers are locked in a first-round series after finishing with identical 51-31 records this season. By virtue of winning the season series, Los Angeles hosted Game 1 on Saturday and will host Game 2 on Tuesday.