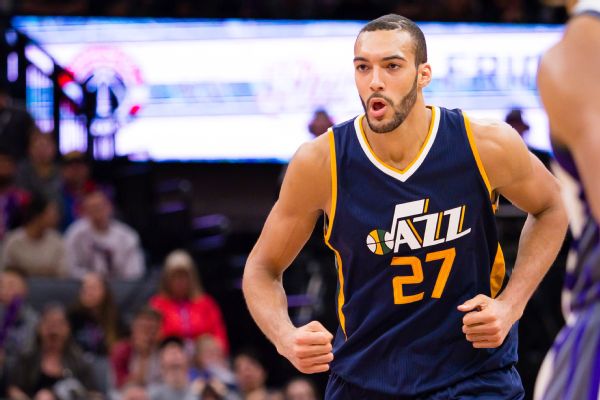 SALT LAKE CITY -- The Utah Jazz feared the worst when Rudy Gobert was carried off the court by teammates 17 seconds into the playoffs.

Two weeks later, Gobert is a huge reason the Jazz have taken control of their first-round series against the Los Angeles Clippers.

A Defensive Player of the Year candidate, Gobert, who is 7-foot-1, has been a force in the middle for the Jazz all season. Since his return to the lineup, Utah has won the rebound battle against Los Angeles and outscored the Clippers in the paint.

"I've just tried to do the same things I've done to try to help the team," Gobert said. "Do what I've been doing all year. At the end of the day, it's just basketball. There's a level of focus that's a little bit higher in the playoffs, but it's the same."

Gobert was diagnosed with and hyperextension and bone bruise in his left knee, but the MRI showed no structural damage and no danger of long-term repercussions. From that point on, Gobert knew he'd return.

The Jazz have won two in a row since his return, and Utah has outscored the Clippers in the paint in both games by a combined 92-64. The team that has scored the most points in the paint has won each game.

"Rudy erases a lot of mistakes," Jazz guard Rodney Hood said. "And he cleans up a lot of bad offensive possessions by rebounding the ball. It's great just to have him back.

"He's been making plays out of pick-and-roll, finding guys in the corner, finishing for himself or dunking and things like that. We've got to continue to find him, because that's a weapon for us."

Utah also has won the rebounding battle in the two games since Gobert has returned by a combined 85-65 after the Clippers had an 80-60 advantage in the previous two games.

"His competitiveness and his presence on the defensive glass, as much as anything," said Jazz coach Quin Snyder about Gobert's biggest impact. "He changes some things with his rim protection. But what he's given us on the boards on both ends of the floor ... he's had a number of games this year where he's had some big offensive rebounds late in the game. Can't say enough about him on the glass."

Clippers coach Doc Rivers has repeatedly said the presence of Gobert doesn't impact his team's offense. The absence of Blake Griffin, who's out for the remainder of the postseason with a toe injury, has certainly made a difference in the Clippers' offense. Combine that with Gobert's return, and Los Angeles' offensive production certainly has dropped.

"Where Rudy really impacts the game is when we're playing defense because of his ability to get behind a defense," Rivers said. "So you have to be far more careful in your pick and roll coverage. What we do offensively, we've basically played the same way all year and we're not going to change that for anyone."

Gobert has downplayed the individual matchup between he and Clippers center DeAndre Jordan, but Snyder called it one of the marquee matchups of the playoffs. The two have seen plenty of each other this season, starting with the 2016 Olympic Games when Gobert represented France and Jordon was on Team USA. Jordan earned his first All-Star nod this year, something Gobert certainly wanted.

Jordan averaged 17.5 points and 14 rebounds and was dunking at will in Games 2 and 3. He averaged 13 points and 11 rebounds in Games 4 and 5. Gobert being able to play Jordan 1 on 1 helps the entire defense since there's no need to send extra bodies to defend or box out.