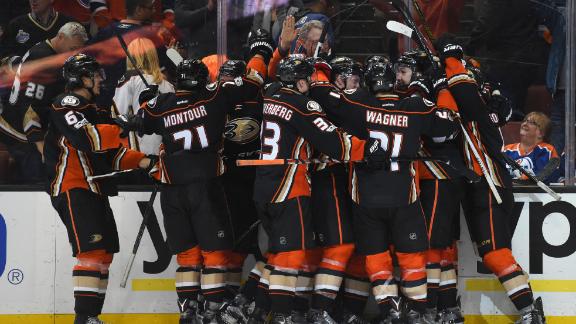 ANAHEIM, Calif. -- Considering the way Ryan Getzlaf has taken over the second-round series with the Edmonton Oilers while pulling his Anaheim Ducks out of a 2-0 series abyss, one of the NHL's biggest -- and perhaps most overlooked -- stars just might be unstoppable.

Riding one of the most remarkable weeks of a Hall of Fame-worthy career, three-time All-Star Getzlaf has a chance to finish the job and advance to the Western Conference finals when the Oilers host Game 6 at Rogers Place on Sunday (7 p.m. ET).

"We didn't accomplish anything. We got ourselves a lead in the series," Getzlaf said after the historic 4-3 double-overtime win in Game 5 against the Oilers that left much of the hockey world in awe. "We got ourselves back in this thing and we've got to go there and take care of it."

With 12 NHL seasons under his belt, Getzlaf has already done it all, winning a World Junior gold in 2005, a Stanley Cup in 2007, Olympic gold medals in 2010 and 2014 and a World Cup title last year. He has 814 career points, second behind Teemu Selanne for the Ducks franchise record, and was second in Hart Trophy voting in 2014.

As accomplished as Getzlaf was before the Stanley Cup playoffs began, he might have cemented his legacy this past week, and not just for his eight points in three games. He's on a truly impressive run in which he reminded the hockey world that, although Oilers captain Connor McDavid might be the star attraction, Getzlaf is still one of the best players in the world.

"He's our leader," said teammate Corey Perry, who scored the double-OT winner in Game 5 to cap the comeback. "When things are going, he's leading by example."

Things definitely got going for Getzlaf after the Ducks earned a crucial Game 3 win in Edmonton that came on the heels of consecutive home losses to start the second-round series. With two goals in Game 4, Getzlaf passed former teammate Selanne for the Ducks' playoff-goals record.

Then came Game 5 and the comeback hockey fans will be talking about for a long, long time.

With Anaheim trailing 3-0 late and countless Ducks fans filing through the Honda Center parking lot, looking to beat the traffic, Getzlaf scored the first goal that sparked an unfathomable rally. That historic comeback erased the Oilers' lead with three goals in the final 3:16 -- the first three-goal comeback with less than four minutes remaining to force overtime in Stanley Cup playoff history.

Getzlaf then completed the comeback 6:57 into the second overtime period with a perfect centering pass to Perry, who held on to the puck and beat a sprawling Oilers goaltender Cam Talbot.

Even before the late comeback, Getzlaf had done everything for the Ducks but sell pretzels, his tasks ranging from taking key faceoffs (he went 12-10 overall) to quarterbacking the power play to killing penalties. He had eight shots and even drew a penalty shot 9:12 into the game on which he subsequently missed the net. He finished the night with a goal, an assist, a plus-2, two blocked shots and two hits over an impressive 34:42, which was third on the team.

These standout performances against Edmonton have been a testament to Getzlaf's on-ice powers. But since arriving in Anaheim shortly after the Ducks took him 19th overall in the 2003 draft, he has developed as much as a leader off the ice as he has a player. That capacity for leadership further evolved when he was named captain in 2010.

The poise with the puck and superb shot haven't worn down through all the big moments Getzlaf has faced on hockey's biggest stages. But with 15 points in nine postseason games, ranking second behind Pittsburgh Penguins star Evgeni Malkin for the playoff lead, and eight goals, tied with Penguins rookie Jake Guentzel, there's something particularly special about what Getzlaf has done of late. This isn't the 22-year-old phenom who hoisted the Cup in just his second full NHL season.

"The biggest thing I've learned is that I can't worry about anybody else around me or what they're doing. I've just got to go out and do what I'm going to do and try and play my game, and hope the guys follow," said Getzlaf, who turns 32 on May 10. "I've spent too many hours worrying about the rest of the guys and what they're doing. I know this group trusts me and I trust them."

There's a maturity to Getzlaf now, an implicit understanding that his teammates look to him for leadership when it seems like all is lost.

And an appreciation that he has the power to lead the Ducks as far as they want go.