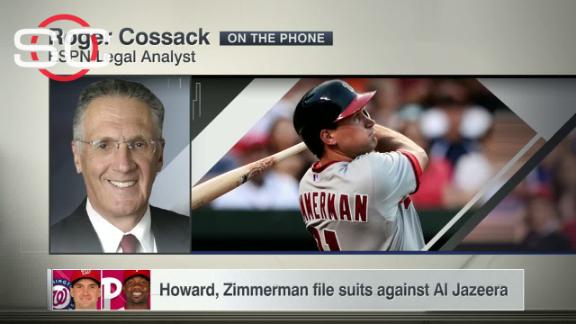 Washington Nationals first baseman Ryan Zimmerman and Philadelphia Phillies first baseman Ryan Howard have filed lawsuits against Al Jazeera, which reported in a documentary that the two, along with several other professional athletes, allegedly received shipments of performance-enhancing drugs.

In the lawsuits filed Tuesday, Zimmerman and Howard claim the Al Jazeera America report on sports doping, titled "The Dark Side," contained false statements and was inaccurate, unsubstantiated and reckless in nature.

The amount of the general and punitive damages sought by both Zimmerman and Howard will be determined at trial, but both lawsuits state that the financial impact of the report on the players "will be in the millions of dollars."

The suit names as defendants Al Jazeera America, reporter Deborah Davies and British hurdler Liam Collins, whom Al Jazeera sent undercover to expose PED use in sports. The lawsuits also ask for an injunction removing all questionable material about Howard and Zimmerman from publication.

In a statement issued after the filing, Howard said Al Jazeera's "irresponsible reporting forced me to take this action to protect my name and to fight back against the spreading of these lies."

The Al Jazeera report was based on secret recordings of former Indianapolis anti-aging institute worker Charles Sly, who named Zimmerman and other high-profile athletes as having received steroid-like Delta-2 hormone supplement shipments from him while he worked at the Guyer Institute.

Sly has since recanted the story and told Al Jazeera that the statements attributed to him "are absolutely false and incorrect."

In the filing, Zimmerman's attorneys claim the "defendants knew full well that their 'source' [Sly] had recanted his scandalous and untrue allegations against Mr. Zimmerman, but, abdicating all journalistic responsibilities, defendants nonetheless chose to publish their defamatory story in an attempt to stir scandal and increase Al Jazeera's low ratings, no matter the cost to Mr. Zimmerman."

In a statement released Tuesday night, Zimmerman said, "I felt it was necessary to file this suit to restore my reputation and to hold Al Jazeera accountable for its actions."

Al Jazeera's report claims Sly was asked by Collins during the expos how long he had known Zimmerman and Sly responded, "Probably six years."

"I worked with him in the offseason. That's how I get him to change some stuff," Al Jazeera quoted Sly as saying.

Howard and Zimmerman, because they are public figures, bear the burden of proof in showing not only that the statements are false but also that Al Jazeera acted either with actual malice or reckless disregard of the truth.

A spokeswoman for Al Jazeera America told The Associated Press the network will not comment.

Denver Broncos quarterback Peyton Manning was the most prominent name mentioned in the Al Jazeera report, which said Manning's wife, Ashley, had received shipments of HGH. Manning called the charge "a freaking joke."

Asked Dec. 30 if he intended to file a suit over the report, Manning said: "No, I haven't decided that. I don't want to deal with that until after the season."

The report linked several other athletes to HGH and other drugs. That list includesGreen Bay Packers linebacker Mike Neal, who allegedly introduced teammates Julius Peppers and others to Sly. The report mentions Pittsburgh Steelers linebacker James Harrison, Peppers and Neal as athletes who received shipments of the Delta-2 performance-enhancing drug from Sly. The report went on to say Sly furnished Clay Matthews with painkillers.

Al Jazeera's Davies told MSNBC after the report aired Dec. 28 that she stands by her story. She also defended her source for the story, Sly, and said he was credible.

"Outside The Lines" investigative reporter T.J. Quinn contributed to this report.