Sammy Watkins to Bills: 'You're making me look bad' 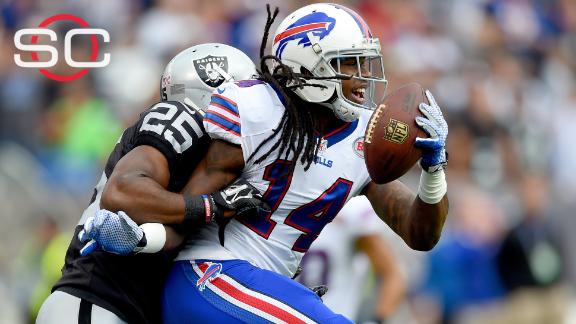 Buffalo Bills wide receiver Sammy Watkins is upset with his lack of targets, telling The Buffalo News this week that he and his agent told the team that they were making him "look bad" after the Bills selected him fourth overall in 2014.

"I need the ball at least 10 times -- I need 10 targets -- and l'll be fine with however many yards I get," Watkins told the newspaper. "And that's what I addressed in talking with my agent. We reached out to a couple people and tried to pull some string like, 'Hey, I need my targets. You came up to draft me and I'm not getting targets -- that's a problem.'

"'You're making me look bad, and you're making yourself look bad. Why not make both of us look good?'"

Watkins has been sidelined since suffering a calf injury in the first quarter of the Bills' Sept. 27 win over the Miami Dolphins. It's the sixth time the former Clemson star has been injured since the Bills traded the No. 9 overall pick in 2014 and their 2015 first-round pick to the Cleveland Browns to move up five spots to select Watkins, though this is the first time he has missed regular-season action.

Watkins told reporters Wednesday that he wants to play Sunday against the Cincinnati Bengals, even if it means reinjuring his calf. But coach Rex Ryan reiterated Thursday that it's not Watkins' decision to make.

In the two games before Watkins' injury, quarterback Tyrod Taylor targeted him 10 times, tied with Percy Harvin and Charles Clay as the most on the team. Watkins, however, wants more looks.

"For a guy you go up in the draft to take as your No. 1 receiver, you would love those 15 targets thatJulio [Jones]gets, those 20 targets that Odell [Beckham Jr.]gets," he told the newspaper. "Of course I'd have 100 yards every game and a TD, if I'm getting 20 targets."

With EJ Manuel and then Kyle Orton throwing him passes last season, Watkins finished his rookie campaign with 65 catches for 982 yards and six touchdowns, shy of the production by Beckham (91 catches for 1,305 yards), who appeared in 12 games.

"Everybody looks at you getting zero catches, zero yards, but when you look on film, 90 percent of the time you're open," Watkins told the newspaper. "I understand that these guys are young and they need some time to trust me. Once we get that trust, it'll be different."

Added Watkins: "That's what I get mad at: when I don't get looked at. I can look at film, and his eyes go straight that way and I'm not getting looked at, at all. That's when I get frustrated. When I have one-on-one coverage, go to me. I don't care what's going on over there. I don't care if he's open. When I get one-on-one, just target me."