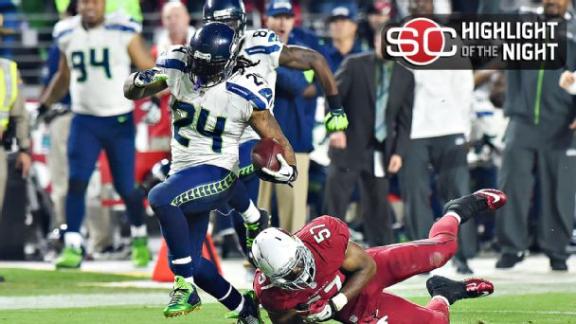 GLENDALE, Ariz. -- Seattle's defense was stifling as usual and its offense had a record-breaking eruption against a defense that's supposed to be one of the NFL's best.

That team from the Pacific Northwest sure looked a lot like the Super Bowl champs of last season in its 35-6 victory over the Arizona Cardinals on Sunday night.

Russell Wilson threw for two touchdowns and ran for another and the Seahawks amassed a franchise-record 596 yards to close in on another NFC West title and the No. 1 seed in the conference.

"That's about as much fun as you can have playing NFL football in the regular season," Seahawks coach Pete Carroll said.

Seattle (11-4) moved into a tie with Arizona (11-4) for first in the NFC West and holds the tiebreaker by virtue of two wins over the Cardinals.

A Seattle win at home over St. Louis in next weekend's regular-season finale would clinch the NFC's No. 1 seed in the NFC. That would have the Seahawks at home throughout the playoffs, until they'd come back to this same Arizona stadium for the Super Bowl.

"They're playing awesome football," Cardinals cornerback Patrick Peterson said. "You can't taking nothing away from that ballclub. They have a championship pedigree, what it takes to win on the road, what it takes to win the division. Obviously, it's not over yet, but they're one step closer.''

Arizona's only remaining hope of winning the division is to have the Seahawks lose to the Rams and the Cardinals win at San Francisco. Otherwise, Arizona will be relegated to a wild-card spot and a first-round game on the road. The Cardinals would have clinched the No. 1 seed in the conference with a victory.

Instead, the Cardinals suffered their most one-sided loss of the season and their only one at home in eight games.

Marshawn Lynch sat out the first quarter with what the team called an "upset stomach," then came in to score on a 6-yard run in the second quarter and a spectacular, multiple tackle-breaking 79-yard scoring run in Seattle's 21-point fourth quarter.

After his long run, Lynch spun around in the air and grabbed his crotch facing the field before falling to the turf.

Third-string quarterback Ryan Lindley, pressed into action with an injury to Drew Stanton in the previous game, was 18-for-44 for 216 yards and an interception against a Seattle defense that ranks No. 1 in the NFL and has allowed 33 points in its past five games.

"He needed more help," coach Bruce Arians said. "He didn't jump offsides on third-and-goal, that's for sure. Points were going to be a premium for us. Overall, he threw about how we expected him to do."

Wilson completed 20 of 31 passes for 339 yards, including touchdown passes of 80 and 20 yards to tight end Luke Willson. Lynch gained 113 yards on 10 carries, and Wilson ran for 88 yards in six attempts.

The blowout would have been worse had Steven Hauschka not missed three field goals.

Wilson's 55-yard run on the final play of the first quarter moved the Seahawks past midfield, but Seattle stalled and Hausschka's 52-yard field goal was wide right.

Arizona took over at its 42 and, with the help of two Seattle penalties, Arizona moved in to get Catanzaro's first field goal and lead 3-0.

On the second play after Arizona's kickoff, Willson got behind the Cardinals' defense, Wilson lofted the ball in perfectly and the 80-yard touchdown play put Seattle up 7-3 with 7:03 to play in the half.

It stayed 14-3 until the fourth quarter, when the bottom fell out for the Cardinals in what had been termed the biggest regular-season game in franchise history.

Then the three late TDs made it a blowout.

Notes: The Seahawks have allowed a combined 33 points in their five-game winning streak. ... Seattle's previous total yards record was 591 at San Diego on Dec. 29, 2002. ... The Cardinals hope to have Stanton back for their playoff opener. .... The Cardinals are 13-3 at home in Arians' two seasons, and two of the losses were to Seattle. ... All 18 points in Arizona's past two games came by field goal.

Seahawks Crush Cardinals
SportsCenter Highlight of the Night: Marshawn Lynch rushed for 113 yards and two touchdowns in the Seahawks' 35-6 victory over the Cardinals.

Baldwin Talks Victory Over Cardinals
Seahawks wide receiver Doug Baldwin commented on his team's offensive explosion in its 35-6 victory over the Cardinals.

Are The Seahawks The Best Team In The NFC?
Trent Dilfer breaks down the state of the Seahawks following their 35-6 victory over the Cardinals.

Seahawks Crush Cardinals
SportsCenter Highlight of the Night: Marshawn Lynch rushed for 113 yards and two touchdowns in the Seahawks' 35-6 victory over the Cardinals.

Baldwin Talks Victory Over Cardinals
Seahawks wide receiver Doug Baldwin commented on his team's offensive explosion in its 35-6 victory over the Cardinals.

Are The Seahawks The Best Team In The NFC?
Trent Dilfer breaks down the state of the Seahawks following their 35-6 victory over the Cardinals.