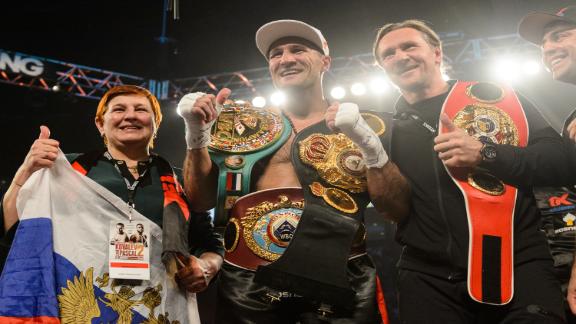 MONTREAL -- Unified light heavyweight titleholder Sergey "Krusher" Kovalev had a much easier time in Saturday's rematch with Jean Pascal than he did the first time he knocked Pascal out.

Ten months ago, Kovalev knocked Pascal out in the eighth round of a fairly dominant performance, but he totally outclassed Pascal in the rematch Saturday night before 9,866 at the Bell Centre.

Kovalev beat, battered and bloodied Pascal in a one-sided destruction in front of Pascal's hometown crowd before Freddie Roach, working as Pascal's trainer for the first time, stopped the fight in the corner after the seventh round.

It was a virtually flawless performance from the fearsome Kovalev, who retained his three world title belts and continued to power his way toward an expected fall showdown with Andre Ward. Ward, the undefeated former super middleweight champion who is moving up to light heavyweight, was ringside to observe his likely future foe.

Kovalev gave him a lot to digest as he clobbered Pascal, the former light heavyweight world champion, from start to finish.

The fight was a rematch of Kovalev's March 14 defense, also at the Bell Centre, which was an exciting but ultimately one-sided fight. Kovalev knocked Pascal down for the first time in his career in the third round and was ahead 68-64 on all three judges' scorecards when the fight came to an end in the eighth round, with Pascal getting badly rocked by a pair of clean right hands to the head. The referee then stopped the fight.

Although the first fight was exciting and led to talk of a rematch, the excitement cooled in July, after Kovalev and Pascal appeared together in a doubleheader in Las Vegas. Kovalev did his part by destroying mandatory challenger Nadjib Mohammedi in the third round of the main event. But Pascal badly struggled, and most considered him very lucky to escape with a decision win against Yunieski Gonzalez.

Still, the rematch was finalized and was a big deal in Montreal, where it dominated sports media coverage all week, especially after Pascal and Kovalev got very personal with each other in their prefight comments. But when they got to the ring, it was all Kovalev (29-0-1, 26 KOs).

"No, I don't like rematches, but this was a personal fight because Pascal was a special person," Kovalev said sarcastically after the fight. "I mean, he's not polite with anybody around him and don't respect fighters. Anybody he don't respect, believe me. When I'm in Montreal, everyone said to me, 'Kick his ass.'"

That is exactly what he did. Kovalev, 32, a Russian living in Los Angeles, dropped Pascal (30-4-1, 17 KOs), 33, with a jab in the center of the ring in the first round, but referee Michael Griffin called it a slip. Replays showed it was a clean knockdown. Kovalev also steadily worked Pascal to the body with hard jabs in what should have been a 10-8 round.

Kovalev seemed to have Pascal in some trouble during the third round, when he hurt him with a chopping left hand that Pascal leaned into. Pascal got off a hard left hand at the end of the round, but he was basically landing one punch at a time.

Kovalev continued to have his way in the fourth round, when he continued to find a home for his chopping right hand, one of which rocked Pascal with a minute to go.

Kovalev nearly finished Pascal in the fifth round, which was so one-sided that all three judges scored it 10-8 without the benefit of a knockdown.

Kovalev dished out wicked punishment. He nearly dropped him with a right hand and battered him along the ropes as Griffin looked closely. Only a desperation clinch kept him from going down. Then Kovalev landed four consecutive right hands that did more damage moments later.

Kovalev landed 31 of 73 punches in the round, according to CompuBox punch statistics, and Roach threatened to stop the fight before the beginning of the sixth round.

Kovalev seemed to derive pleasure from giving Pascal a beating.

"I would fight more rounds and make him more pain and punish him more," Kovalev said with a laugh. "Oh, wait, they stopped the fight before the eighth round. I don't respect him at all."

After the sixth round, Pascal asked Roach for one more round, but he did not do much, as Kovalev continued to beat him up to the head and body. When the round was over, a weary Pascal returned to his corner and plopped down on his stool, and Roach signaled to Griffin to halt the fight, which Kovalev was leading 70-62 on all three scorecards.

Kovalev's dominance was reflected in the CompuBox statistics. He landed 165 of 412 punches (40 percent), while Pascal connected on only 30 of 108 blows (28 percent).

"Kovalev, you did a better job tonight," Pascal said to the crowd. "He's a great champion. I will be back. Don't worry, guys. I love you and thank you very much."

"I'm very happy if this fight will happen, and just take your time," Kovalev said.

Ward and Kovalev might each fight once more this summer before the fall showdown, which should happen as long as they each win.

"Fans want it, and the fight should be made," Ward said. "They are working out the details."

For his fight ahead of the Ward bout, Kovalev would like to face lineal champion Adonis Stevenson, another Montreal fighter, who was ringside.

"I want to unify all the titles. I would like to fight Adonis 'Chicken-son,'" Kovalev said and made a chicken sound.

Kovalev believes Stevenson is ducking him. The sides had the parameters of a deal for a June fight, until the Stevenson side changed course this week and demanded it be a joint pay-per-view between HBO, which has Kovalev under contract, and Showtime, which does not have a deal with Stevenson and has not televised one of his fights since 2014.

Stevenson (27-1, 22 KOs) entered the ring just as Kovalev called him "Chicken-son" and began shouting at him.

Kovalev would dispute that proclamation, which could be settled this summer, though that fight is unlikely. Rather, Kovalev is expected to face a lesser opponent in June and then move on to the fight with Ward and, with a win, perhaps all the way to No. 1 on the pound-for-pound list.