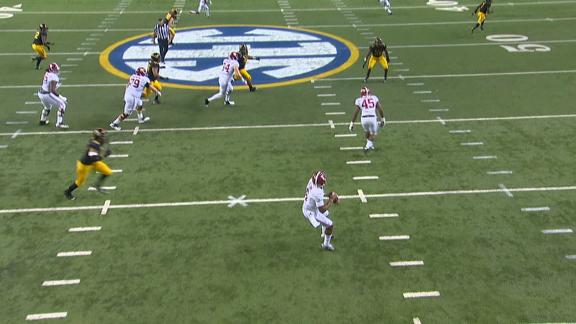 ATLANTA -- Missouristandout defensive end Shane Ray was ejected for targeting early in the second quarter of No. 1Alabama's 42-13 winSaturday in the SEC championship game.

Ray's helmet and hands appeared to hit Alabama quarterback Blake Sims' facemask as Sims was in a prone position after releasing a 58-yard touchdown pass to DeAndrew White with 11:48 remaining in the second quarter.

Missouri coach Gary Pinkel said some members of the Tigers' staff agreed with the call.

"Up top our coaches said that -- I think he had the crown of the head. That's what I was told," he said. "Our coaches upstairs saw it, and they agreed with it. So that's what it was."

By rule, Ray was disqualified from playing in the second half of the SEC title game, but would be eligible to play in Missouri's bowl game.