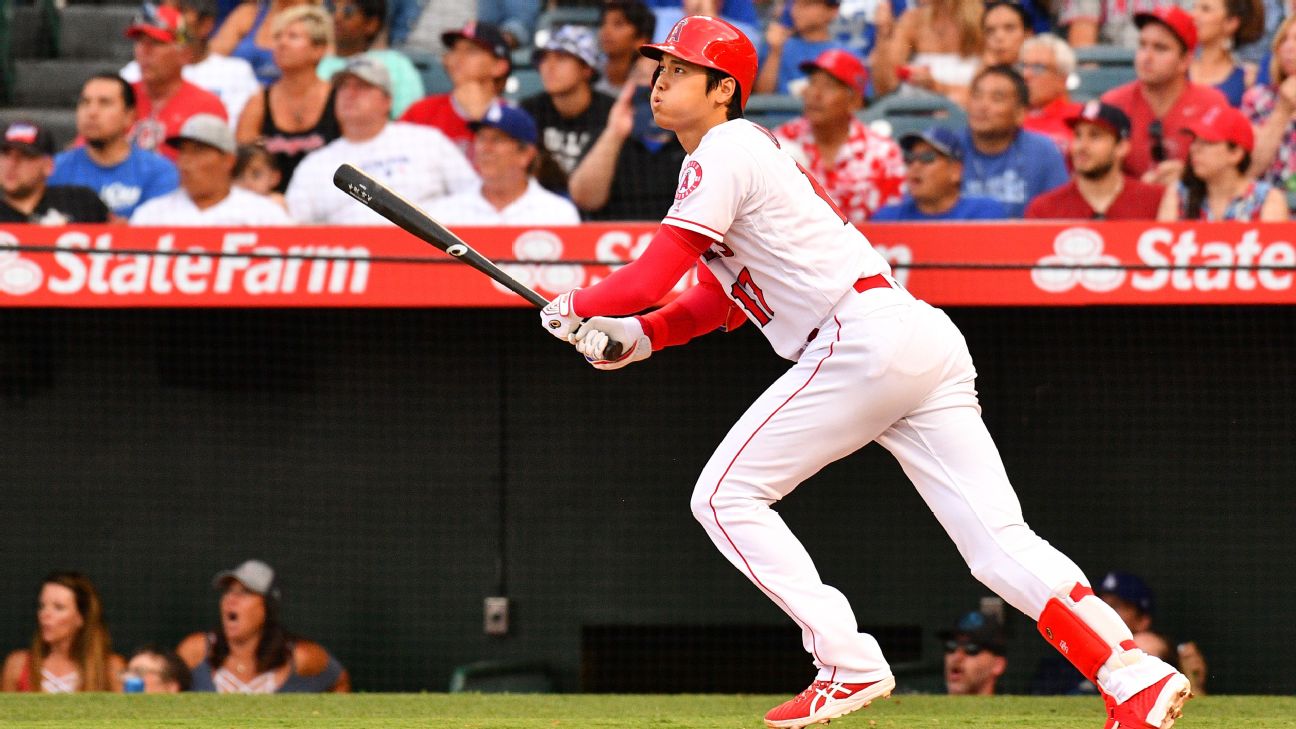 ANAHEIM, Calif. --Shohei Ohtani's right knee was still sore when he arrived at Angel Stadium on Sunday. He took a baseball directly to it in the previous night's ninth inning, on a foul ball against Los Angeles Dodgers closer Kenley Jansen, then spent the ensuing morning receiving treatment.

In the second inning, Ohtani informed Los Angeles Angels manager Mike Scioscia that he would be available to pinch hit if needed.

In the seventh, he hit the home run that won the game.

"It was going to be hard for me to run all-out," Ohtani said through his interpreter after a4-3 win in the Freeway Series finale. "I was glad I was able to hit a home run so I didn't have to run too much."

Ohtani's tiebreaking solo home run carried an exit velocity of 108.8 mph and traveled 443 feet, according to Statcast. It was his first since May 17 and only his third hit in 17 at-bats since returning from the disabled list.

But it was also the second time in three games that he ignited a win for his team, coming 48 hours after his two-out walk and stolen base propelled the Angels to awalk-off victoryin the series opener against the Dodgers.

Ohtani sat because the Dodgers started a lefty, Alex Wood, then replaced the right-handed-hitting Jefry Marte to lead off the seventh, when right-handed reliever JT Chargois entered with the score tied at 3. Scioscia could have saved Ohtani for later, perhaps with runners on base, but the Angels were coming off a bullpen game that forced them to use six relievers for nine innings. There was urgency.

"We needed to score," Scioscia said. "I don't know if we had the 15 innings of pitching that was going to give us a chance."

Ohtani fouled off a 2-2 changeup then kept his hands in on a 96 mph fastball and somehow drove the pitch out to center field, where all but one of his home runs have been hit this season.

"It says a lot for his power, because he doesn't have to get total extension to drive a ball," Scioscia said.

Said Ohtani: "I saw the video, and the pitch was in a really good spot, and I had to keep the changeup in my mind. I was kind of lucky that the ball found the bat."

Ohtani has homered only seven times in 131 at-bats, yet he has hit two of the three farthest balls at Angel Stadium this season. Sunday's ranks third. The one he hit on April 6, which traveled 449 feet, ranks first.

He was noticeably limping as he rounded the bases Sunday. He agreed with a reporter who estimated that the health of his knee might be at about 75 percent and added that he would benefit from Monday's day off, which might allow him to return to full health for a critical three-game series against the Seattle Mariners.

"It usually doesn't take too long to recover," Ohtani said.