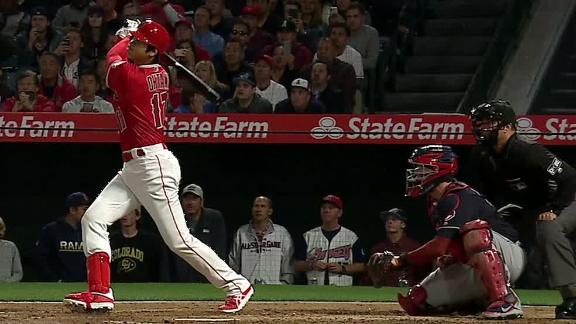 ANAHEIM, Calif. -- Sho Time is off to a powerful start in Anaheim.

Shohei Ohtani hit his first major league home run in his first home at-bat, and he took a curtain call after his three-run homer Tuesday night in the Los Angeles Angels' 13-2 win over the Cleveland Indians.

Ohtani capped a six-run first inning by lifting a ball out to center on a 2-2 count against Josh Tomlin. The Japanese two-way player got the silent treatment from teammates when he returned to the dugout -- but not from the crowd. After players broke character and jumped around Ohtani to celebrate, Mike Trout pointed to the field and instructed Ohtani to take a curtain call.

"It obviously felt really, really good," Ohtani said through an interpreter while drying himself as he spoke to the crowd after teammate Kole Calhoun surprised him with a bucket of icy water after the game.

Ohtani is the first player since the American League adopted the designated hitter in 1973 to start a game in a season as a pitcher and homer in another game as DH, according to Elias Sports Bureau.

The 23-year-old added two singles to end up with three hits, including a hard line drive in the eighth inning. Statcast measured the latter single at 112.8 mph, the hardest hit ball by an Angels player this season.

"Shohei put on a display of the type of talent he has tonight,'' Angels manager Mike Scioscia said. "He showed the power. He showed the ability to just square up a baseball. And he had a great night for us.''

Ohtani's shot would have been a grand slam, except Calhounhad scored on a wild pitch earlier in the at-bat. Ohtani finished the night 3-for-4 with three RBIs and two runs scored in the win.

"After getting my first hit out of the way, I felt more comfortable and relaxed,'' Ohtani said. "And everyone around me was doing a good job too, making it tough for the pitcher. That was a factor.''

Ohtani will pitch against theOakland Athleticson Sunday in his first start at home.

"It's a lot of fun to see something like that from a guy that has a huge spotlight on him and obviously doesn't let it bother him, comes out and plays extremely well the first week of the season,'' Angels infielderIan Kinslersaid.