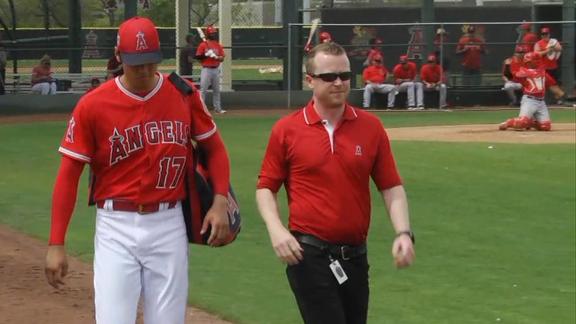 Ohtani, 23, unofficially threw 85 pitches, but his fastball command was off, resulting in five walks, a hit batter and two wild pitches. His velocity was also down from previous starts, according to scouts in attendance.

Still, the Angels said they were happy with the performance. Manager Mike Scioscia called it a "great outing."

"There were some things he was working on, he's trying to nail down," Scioscia said afterward. "When it's in sync, it [his fastball] comes out hot. Early on, it was somewhat erratic. He's working on some things. He'll be fine."

Ohtani was hovering around 92-94 mph on his fastball while bouncing as many pitches as he was missing bats early. He pitched better as the outing continued but won't dissuade critics after a spring in which he compiled a 27.00 ERA in just two Cactus League starts. The rest of his appearances came on the back fields.

Ohtani concurred with Scioscia that he was working on other things than his fastball, so he wasn't concerned with the results with that pitch Saturday. He did break off some curveballs, which froze hitters for strike three several times.

"I was focusing on my splitter and breaking ball more than my fastball, and I felt like I was able to work on my fastball in my previous outings, so I was more focused on breaking balls," Ohtani said. "That's probably why my velocity was a little bit down."

Ohtani was asked if he wished he had faced more major league hitters this spring after coming over from Japan during the winter.

"Of course, in a perfect world, I would've like to have faced more major league hitters, but it's more than that," he said through his interpreter. "It's also about me making adjustments with the mound and the ball and all that. It didn't really matter who I faced. I just had to check with my own stuff, mechanics [and] timing."

The Angels haven't made any formal announcements, but the expectation is that Ohtani will pitch the third game of the season next Saturday against the Athletics in Oakland, California.

"Let's see how he comes out of it," Scioscia said. "This was a great outing today, though."