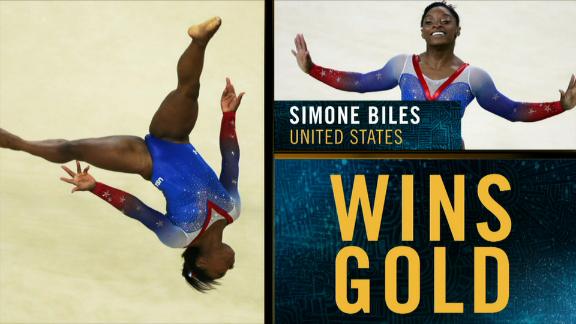 RIO DE JANEIRO -- American Simone Biles put the finishing touches on one of the greatest Olympics by a gymnast ever, capturing her fourth gold of the games with a showstopping performance in the floor exercise on Tuesday.

The 19-year-old completed an extraordinary stretch that included a team gold for the "Final Five'' as well as individual golds in the all-around and vault and bronze on balance beam. Her five medals tie the most for an American woman in a single Olympics and her four golds tie an Olympic record shared by three others.

Biles embraced longtime coach Aimee Boorman shortly after her routine, which includes a tumbling pass named in her honor and a Brazilian-themed segment intended to play to the crowd in Rio. She beamed when her score of 15.966 was posted.

Teammate Aly Raisman followed with a 15.500 silver-medal performance to give her a third medal during Rio and six overall in her Olympic career.

It was the first time the Americans have finished 1-2 in the Olympic individual event, and it brought the U.S. women's total to nine medals during the meet -- the most ever by the U.S. at an Olympics.

Amy Tinkler of Great Britain earned bronze, though the day -- and really the Olympics -- belong to Biles. While she admitted she was a bit tired Monday after her only one real mistake of the games -- a wobbly landing on beam that cost her a shot at gold -- Biles hardly looked it during her signature event.

Buoyant in a glittery red, white and blue leotard, Biles spent 90 seconds showcasing her talent. She doesn't tumble so much as fly, her 4-foot-8 frame soaring over the white mat as if she was trying to touch the video board three stories above. She plans to take a break following the closing ceremonies and try to adjust to a life that will never be the same after nine days that elevated her from gymnastics' best-kept secret to star.
Related topics:
sportsespnsimone bilesolympic sportsaly raismanrioaimee boormanespnwartistic gymnastics
Copyright © 2020 ESPN Internet Ventures. All rights reserved.
More Videos
From CNN Newsource affiliates
TOP STORIES