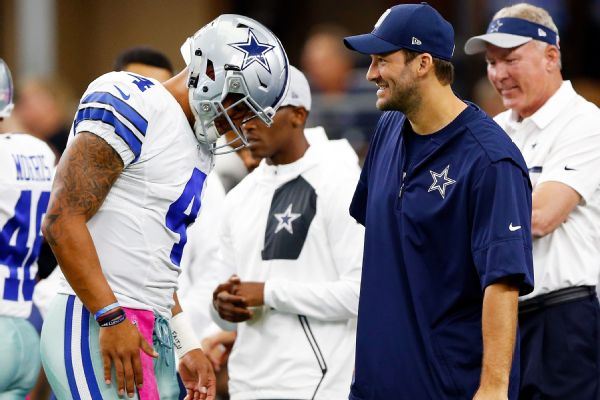 The potential return of Dallas Cowboys quarterback Tony Romo and his increased involvement with the team throughout the week has some people within the organization concerned about how rookie quarterback Dak Prescott and his teammates will be affected, a source told ESPN's Ed Werder.

One Cowboys source told Werder that some in the organization have labeled Romo's return "The Big Dilemma."

Romo, the Cowboys' franchise passing leader, was listed as inactive Friday and is not expected to be active for Sunday's game against the Pittsburgh Steelers. It marksthe first time since suffering a compression fracture in his back during the preseason that he has been a game-day decision.

The belief within the team is that this squad has developed a unique chemistry -- even better than that of the 2014 team Romo led to a 12-4 record.

"It's a close-knit group, and a lot of that is coming from the quarterback position," the source said. "Do you mess with that? I don't know. There's a concern there."