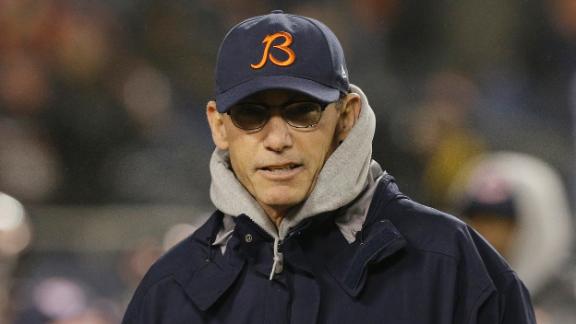 While it comes as no surprise given the team's struggles, at least three members of the Chicago Bears coaching staff expect coach Marc Trestman and the staff to be let go after the regular-season finale Sunday at Minnesota.

The staff hasn't yet been told of general manager Phil Emery's or ownership's intentions, but one staffer said he'd be "shocked" if sweeping changes aren't made.

Finishing the season on a five-game losing streak after losing 13-9 to the Vikings on Sunday, the Bears (5-11) are expected to be looking for their second head coach in three years, and it's not a given Emery will return, although his signing of Roberto Garza on Friday to a one-year extension indicates he'll be back in 2015.

Multiple members of the coaching staff for weeks have anticipated being fired at the conclusion of the season. But publicly, Trestman and his assistants have said they were focused solely on the task at hand.

Asked whether he dreaded what could be coming after Sunday's contest at TCF Bank Stadium, Bears special-teams coordinator Joe DeCamillis said, "No," as he, Trestman and defensive coordinator Mel Tucker expect there to be speculation concerning their job security, given the team's record.

"You're going to say, 'He's not telling the truth,' but you deal with this," DeCamillis said. "I've been on staffs that it's an issue. I'm just trying to roll through this thing and try to get ready for Minnesota. You have quiet times where you have quiet times where you think about that stuff. But this isn't a quiet time right now. I'll worry about that stuff whenever it happens, I guess. What did you say, Monday?"

"No one is happy at this time about where we are," he said. "You can't sugarcoat it and think everyone is just on Cloud 9 right now. But we have to be mature about it. You have to handle it. You're going to have some moments, and we'll just work through it. We still have one more game to play, and so that's where our focus is. That's why it's difficult for me to reflect right now because we're not in reflect mode. We're in preparation mode for our last game. There will be plenty of time to reflect and look back. Right now, we've got a really big game ahead of us."

Trestman's high-priced offense underachieved in 2014 perhaps more than the club's defense. Adding to that is the off-the-field drama, too, with issues regarding trust between players and coaches in the locker room, overall dysfunction and the benching of starting quarterback Jay Cutler, just to name a few.

Trestman declined on Friday to discuss the speculation regarding his job security.

"I won't characterize it. I've addressed that. When you're 5-10, things are going to swirl," Trestman said. "There's going to be a lot of noise out there. I've tended to focus on my purpose, which is to do the best I can to get the team ready to play. At this point, we're 5-10. It hasn't been good enough this time around, no doubt about it. I think everybody, coaches included, we've done our best. We've done our best all week. We'll continue to play through it, fight through it for three hours on Sunday and stay focused on the things that we obviously can control, and that's this football game."