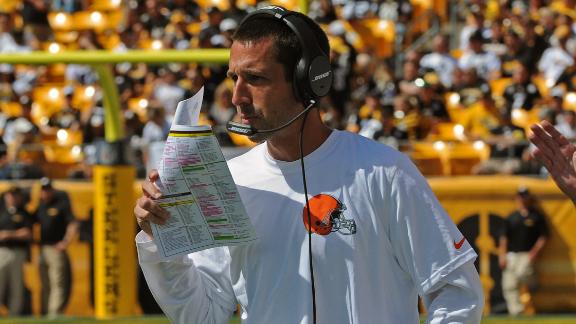 The Cleveland Browns' tradition of change continues, as a team source told ESPN.com Thursday that offensive coordinator Kyle Shanahan and quarterbacks coach Dowell Loggains will not return next season.

Shanahan resigned and Loggains was fired, according to a league source.

Both spent one year with the Browns, and both were under contract for 2015.

An announcement is expected later Thursday. The news was earlier reported by Fox Sports.

Sources familiar with the situation said the split was caused because the pair did not see eye to eye with the front office about quarterback Johnny Manziel. The front office wants Manziel to be the starter, and the source said the coaches do not believe they can win with him.

Shanahan felt the decision to start Manziel was forced on the coaching staff, and that the yearlong insistence to play him when he wasn't ready wore on Shanahan, the team source said.

According to the source, Shanahan is an extremely popular coach among the players, many of whom feel Brian Hoyer is a good quarterback.

"They are both smart to get out now," another source said about the exits of Shanahan and Loggains.

Shanahan is among several candidates to fill the head-coaching vacancy with the Buffalo Bills. A source told Jeremy Fowler of ESPN.com that he believed Shanahan navigated his departure knowing he had fallback options, including the possibility of leading Dan Quinn's offense if the Seattle Seahawks' defensive coordinator lands a head-coaching job.

The Bills, San Francisco 49ers and Oakland Raiders already have interviewed Mike Shanahan and would consider hiring the father-son duo with Mike as head coach and Kyle as offensive coordinator, Cleveland.com reported Wednesday.

A source said the decision to play Manziel in the 14th game against Cincinnati was not viewed fondly by the coaches, who felt there was pressure all season from the front office to get Manziel on the field.

Cleveland.com reported this week that the coaching staff believed that some in the front office were sending texts during games to the sideline about personnel and plays.

Shanahan brought an entirely new system to the Browns when he was hired a year ago, installing a zone running scheme and a passing game based on play-action.

The Browns were without three Pro Bowlers on offense for large portions of the season: center Alex Mack, tight end Jordan Cameron and receiver Josh Gordon.

Despite that, the Browns scored at least 21 points in nine of the first 11 games and were 7-4 heading to Buffalo. Against the Bills, coach Mike Pettine pulled Hoyer in the fourth quarter, and that started an avalanche of Manziel questions.

Pettine stuck with Hoyer for one more game as he struggled in a loss to the Colts. The Browns then switched to Manziel against Cincinnati, where he appeared overwhelmed in a 30-0 loss.