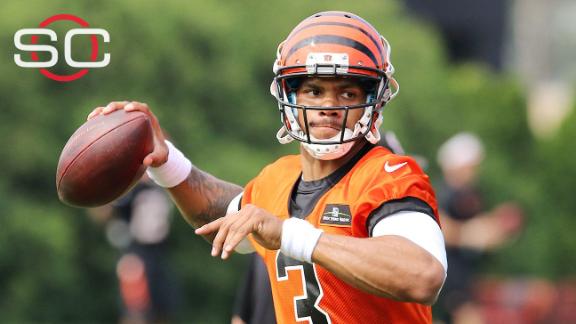 CINCINNATI -- The Bengals are not happy that former quarterback Terrelle Pryor posted images from their recent minicamp to one of his social media accounts Monday afternoon.

Pryor, who was waived by Cincinnati on Thursday, posted to Twitter three videos of himself throwing passes during full-team drills at the Bengals' minicamp. Although minicamp is open to reporters, television cameras are permitted to roll only during warm-up and start-of-practice installation periods. Reporters are not allowed to document, via video, accounts of those full-team drills.

"I haven't been around another player who has done that," a team source told ESPN about Pryor's sharing of the practice video. "By no means did we think a player would do something like that."

About an hour after they went live, the videos were removed from Pryor's social media.

Pryor had spent the past month with the Bengals after a successful tryout during rookie minicamp in May. A 2011 supplemental draft pick to the Oakland Raiders, Pryor came to Cincinnati in hopes of competing for the Bengals' backup quarterback job. He was brought there by offensive coordinator Hue Jackson, who was the Raiders' head coach at the time Pryor was drafted.

After starting Bengals organized team activities (OTAs) as the No. 3 quarterback on the depth chart, Pryor dropped a spot to fourth, jumped by fellow backup Josh Johnson. It was clear throughout the spring practice period that starter Andy Dalton and No. 2 quarterback AJ McCarron had distanced themselves from the others.

"There's a reason we made the decision [to cut Pryor] that we did," the team source said. "We did what we felt was best for us.

"If I'm [another team], I have to think hard about signing him or else he might give out valuable information of theirs, too."

According to the source, once it was clear Pryor wouldn't dethrone McCarron for the Bengals' top backup quarterback job, the decision was made to let the fourth-stringer go. The Bengals' thoughts were that with six weeks until the start of training camp, Pryor might be able to find another team where he would legitimately compete for starter's reps during training camp. He simply wasn't going to get that opportunity in Cincinnati, the source indicated.

Accompanying one of Pryor's videos was the caption: "Going to miss QB but I will make a great WR! Already working !!"

A report surfaced late Thursday that Pryor wouldswitch to receiver as he markets himself to other teams for a new job. He was claimed by theCleveland Brownson Monday and the team views him as a wide receiver prospect.

Before Pryor's brief stint in Cincinnati, he spent time with Kansas City and Seattle in the past two years.