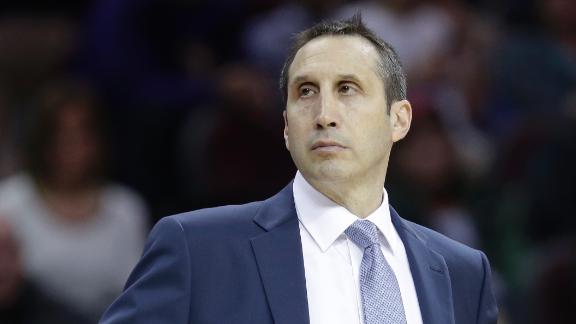 There is a growing level of worry within the Cleveland Cavaliersorganization about first-year coach David Blatt and his ability to reach the team, according to league sources.

Sources told ESPN.com that there is rising concern in team circles about the level of response that Blatt is getting on the floor, with Blatt himself acknowledging that the Cavaliers "lost our energy and we lost our competitiveness" in Sunday night's embarrassing home loss to Detroit.

The Cavs would prefer not to be forced into evaluating their new coach just 30 games into Blatt's NBA career, cognizant that the job has quickly evolved into a much different one -- after LeBron James stunningly decided in July to return to his home-state team in free agency -- than it was when Blatt was hired from Israeli power Maccabi Tel Aviv in June with no NBA experience.

But the Cavs' effort level, especially defensively, is eroding noticeably, raising the volume of questions about just how much the locker room is listening to the 55-year-old Boston native, who has enjoyed tremendous international success but began this season as a relative unknown to NBA players.

Blatt denied Monday that he didn't have the team's attention.

"Absolutely I do," Blatt said. "We just didn't play well (Sunday). I don't think it was an issue outside of that. A couple games ago we were (17-10). I know some other pretty good teams in the NBA that didn't have that record.

"We have not played perfectly this year, I don't claim that. On the other hand, we're doing pretty good. We lost a couple games, we're down a few of our main players and last night did not look good and we did not respond well to it during the game. I recognize that. And certainly when that happens I'm every bit as much a part of that as everybody else, but it has nothing to do with questions along the lines of what I've heard. I just don't think that's right or fair. I really don't."

When asked Monday whether Blatt was the right coach for the Cavaliers, James wasted no time in saying that he's content with Blatt and that everybody is still in the process of getting to know one another.

Injured starter Kyrie Irving said the team is in "a really good place."

"The thing about it is we can't fault a first-year coach with getting to learn who everyone is," Irving said. "It's a process and just like assembling this team together, every single day we're all developing great relationships and learning how to communication with one another."

Cavs owner Dan Gilbert has proved in the past that he's unafraid to make coaching changes, dismissing Mike Brown this past May with three fully guaranteed years left on Brown's contract in his second stint as Gilbert's coach. Yet it should be noted that Blatt was hired in the summer largely at Gilbert's behest after Cleveland made unsuccessful runs at a number of high-profile college coaches, including Kentucky's John Calipari, Connecticut's Kevin Ollie, Kansas' Bill Self and Iowa State's Fred Hoiberg.

Blatt was indeed asked Sunday at his postgame news conference whether he is worried that he might be losing control of the team. He responded: "I'm not concerned about that at all. I'm more concerned with how we're playing."

Just in the past two weeks, Cleveland has suffered home losses by 29 points (to Atlanta on Dec. 17) and 23 (Sunday's defeat to Detroit without injured starters Irving and Anderson Varejao).

Whispers about the lack of attention that various Cavs players are paying to Blatt during some timeout huddles, as well as their apparent preference to communicate with Cavs assistant and former NBA player Tyronn Lue, have been in circulation for weeks.

"You learn from experience, man," James said Monday. "You go through them and you figure out ways and which button to press as far as you as an individual, what helps the team. ...

Blatt agrees with James in that respect.

"We didn't come out and win 18 games without there being respect or understanding or attentiveness or any of those things," Blatt said. "You know what I mean? So when things go a little bit bad, naturally some people want to pin those questions because they seem to be an easy thing to do. I just think that's kind of unfair and really not to the point."

An eight-game winning streak earlier this month pushed the Cavs to a mark of 13-7, they have been just 5-5 over their past 10 games. During that span, Cleveland ranks 27th in the league in defensive efficiency, 28th in field goal percentage defense and 26th in 3-point percentage defense, according to ESPN Stats & Information. The Pistons made a franchise-record 17 3-pointers Sunday night.

The Cavs, it must be noted, are dealing with some lineup upheaval after Varejao was lost for the season last week to an Achilles tendon tear. Star guard Irving, meanwhile, has missed the past two games recovering from a hyperextended left knee and could miss more time as the team lets him recover from an injury he initially suffered on Dec. 11.

James was asked whether his endorsement would mean a lot for Blatt.

"Well, listen, man, I don't pay no bills around here. Listen, man, I play. I'm happy with who we have at our helm," James said. "He's our coach, but to make it a feud between me and Blatt or the team and Blatt is just to sell. It's just to sell and get people to read it and put something on the bottom of the ticker. That's all it is."

The Cavs are 18-12 and are fifth in the Eastern Conference heading into Tuesday night's rematch with the Hawks in Atlanta, which happens to coincide with James 30th birthday.

"I don't listen to things, and I'm very confident in what I do and what we're doing," Blatt said Monday. "I just know we got to do better right now. That's the important thing."

Dave McMenamin of ESPN.com contributed to this report.

Disconnect Between Blatt And Players
Brian Windhorst reports on the growing level of concern within the Cavaliers organization over coach David Blatt's ability to reach his players.