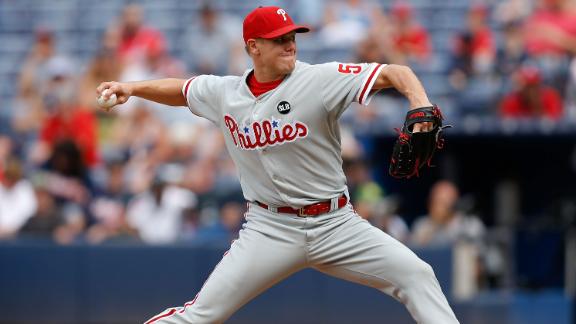 Philadelphia Phillies closer Jonathan Papelbon, who has expressed his desire to be traded multiple times this season, is no longer being actively pursued by the Toronto Blue Jays, Chicago Cubs and Los Angeles Dodgers, sources told ESPN on Wednesday.

Three weeks ago, those three teams looked most likely to trade for Papelbon, but now it's a strong possibility the Phillies won't be able to trade him at all before the July 31 trading deadline.

Several sources have confirmed that the Phillies were so close to moving Papelbon last month that they were telling teams to make their best offer. Then they abruptly pulled back, apparently to wait for the hiring of Andy MacPhail as their next team president.

Now, however, there are indications that the Phillies might have missed their best window to trade Papelbon, whose $13 million vesting option for 2016 remains a major hurdle. The Cubs have called up Rafael Soriano. The Blue Jays are moving Aaron Sanchez to the bullpen. The Dodgers are prioritizing starting pitching at the trade deadline.

The Phillies have the worst record in the major leagues at 34-63 and have failed to make the playoffs since Papelbon joined the team after the 2011 season.

"That's not what I signed up for," Papelbon said at the All-Star break. "I signed up with a team that won 102 games, and I expected certain things. It didn't happen, and I've tried to ride that ship and keep my mouth shut as much as I can. But it's time for the Phillies to you-know-what or get off the pot.

"I feel like three years is plenty enough time to ride it out, so to speak. If the fans don't understand that, I can't really side with them."

The 34-year-old Papelbon, who made the sixth All-Star Game roster of his career last week, has 16 saves and a 1.63 ERA in 36 outings this season. He picked up the win in the Phillies' 5-4, 10-inning victory over the Tampa Bay Rays on Wednesday.

Jerry Crasnick of ESPN.com contributed to this report.