Sources: Enes Kanter could miss up to 2 months after X-rays reveal fractured forearm 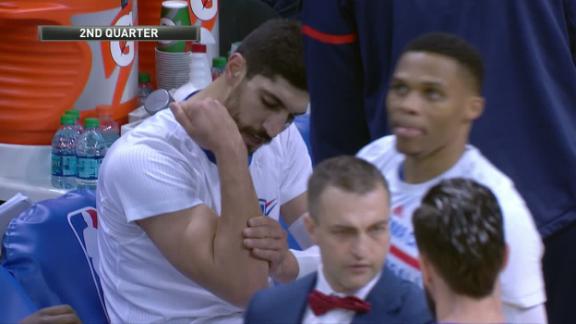 OKLAHOMA CITY -- Enes Kanter fractured his right forearm punching his hand on a chair on the Thunder bench in the second quarter of a 109-98 win over the Dallas Mavericks on Thursday and could miss up to two months, league sources told ESPN.

The Thunder will re-evaluate Kanter and officially update his timetable Friday.

Kanter, who had slapped the floor in frustration a few minutes earlier, walked to the bench during a timeout and slammed his fist into the padded chair. But as he brought his arm down, the folding chair flipped up slightly and Kanter caught his forearm on the metal edge. He quickly went back to the locker room for X-rays, which confirmed the fracture.

"It's tough, man, especially to do it the way he did it, it's very unfortunate," Russell Westbrook said. "He's a strong man, and he'll be back better.

"Things happen. If he could take it back, he definitely would. But I think now we have to look forward and try to figure out what the positive things are and get him back as soon as possible."

Thunder coach Billy Donovan said he wanted to withhold comment on the way Kanter's injury happened until he had a chance to talk to the big man.

"I didn't see it, but obviously I heard about it," Donovan said. "I have had not had a chance to talk to Enes, but I want to talk to him first before I comment just to get his perspective on things."

Kanter left the arena with a wrap around his right wrist and shook his head and patted his chest in a "my bad" fashion.

"Something like that, bro, he didn't mean to do it, obviously," Steven Adamssaid. "It was just one of those really frustrating times and just happened to do what he did. He's already really hard on himself, like no one else can be as hard on Enes as he is on himself. He's probably just feeling so under the weather, just feel bad for him. But still a good man, give him some time, and he'll be back."

Kanter has emerged as one of the league's premier bench scorers, with Westbrook routinely dubbing him the best bench player in the league. He is averaging 14.4 points and 6.7 rebounds in just 21.6 minutes per game, with the Thunder building a system around his post skills in the second unit.

With Kanter out for an expected extended period, the bench group will have to rework its identity, probably around guard Cameron Payne, who recently returned from a broken foot.

"Everybody's got to step up, everybody on that second unit, everybody on the team period," Payne said. "We all got something we're good at. Enes was great. Enes, what he does in the post, he opens up the floor for everyone, but now everybody else has to bring it every night. Whatever they do well, be great at it. I feel we'll do a pretty good job."

The Thunder sit at 28-19, sixth in the Western Conference and in the thick of jockeying for playoff seeding.

While Kanter's injury, and the way it was self-inflicted, was supremely disappointing to his teammates, the Thunder are finding positives in it already.