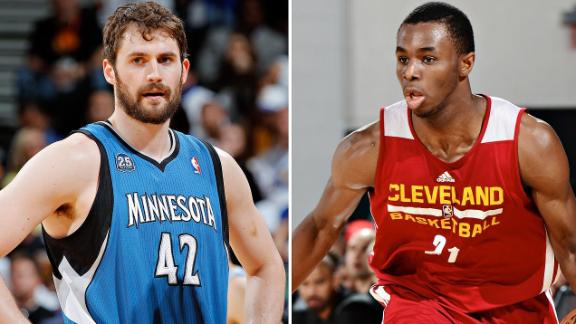 The Minnesota Timberwolves have an agreement in principle to acquire Philadelphia's Thaddeus Young in addition to No. 1 overall draft pick Andrew Wiggins as part of a three-team trade that will send Kevin Love to the Cavaliers, according to sources with knowledge of the teams' deal structure.

Sources told ESPN.com on Friday that the Wolves, Cavs and Sixers, barring any late snags, indeed plan to complete the transaction as a three-team trade Saturday, which is the first day Wiggins is eligible to be dealt after signing his contract July 24.

The Wolves, sources said, have been operating under the premise for days that they will land Young from the Sixers as Love's replacement. ESPN.com reported in July that Wolves president and coach Flip Saunders had pinpointed Young.

One source familiar with league rules told ESPN.com that Wiggins becomes eligible to be dealt at 12:01 a.m. Saturday, as soon as the calendar flips to Aug. 23.

Although nothing can be finalized before Saturday, sources said that the Wolves are poised to surrender a future first-round pick along with the expiring contracts of Luc Richard Mbah A Moute and Alexey Shved to the Sixers for Young, who has two seasons left on his deal valued at $19.4 million.

The Wolves already had verbally agreed to acquire Wiggins, 2013's No. 1 overall pick Anthony Bennett and a future first-round pick from the Cavs for Love. Minnesota would then have the option of flipping that first-rounder to Philadelphia, along with Mbah A Moute and Shved, for Young.

The Sixers tried to get Bennett as part of the Young transaction, sources said, but Minnesota was determined to keep the second-year forward to be a key piece in its rebuilding effort despite Bennett's disappointing rookie season with Cleveland.

Although the Cavs' 30-day waiting period to move Wiggins ends Saturday, sources told ESPN.com on Thursday that the teams can indeed schedule a trade call with the league that day even though it's a weekend, meaning the Love trade can be completed at the earliest allowable date.

Sources say that news conferences to introduce Love and Wiggins with their respective new teams are unlikely before next week, after the various players involved in the transactions have completed their physicals.

Cavs, Timberwolves, 76ers Agree To Trade
Marc Stein discusses the report that Minnesota has agreed in principle to acquire Philadelphia's Thaddeus Young and No. 1 overall draft pick Andrew Wiggins in a three-team trade that will send Kevin Love to Cleveland.