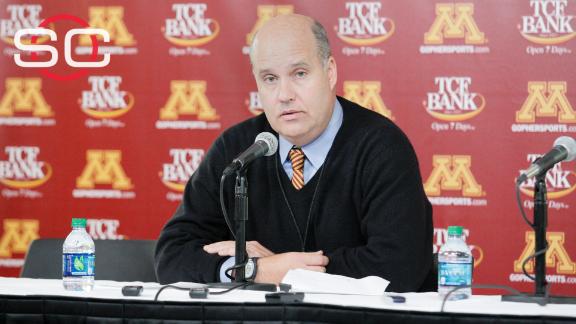 Amelia Rayno, the Gophers men's basketball reporter for the Star Tribune, is the third woman to accuse Teague of sexual harassment in recent days. In a column published on the paper's site Sunday night, Rayno said Teague touched and harassed her and then got into a cab with her and continued to accost her during an incident on Dec. 13, 2013, that began as a simple drink arranged on professional terms.

"So I agreed to have that drink," Rayno wrote. "But this December night was different. Teague asked me about my longtime boyfriend, as he often did. My mistake was acknowledging that we had just broken up. The switch flipped. Suddenly, in a public and crowded bar, Teague tried to throw his arm around me. He poked my side. He pinched my hip. He grabbed at me. Stunned and mortified, I swatted his advances and firmly told him to stop. He didn't."

"'Don't deny,' he said, 'our chemistry.' I told him that he was drastically off base, that my only intention in being there was as a reporter -- to which he replied: 'You're all strictly business? Nothing else?' I walked out. He followed me. I hailed a cab. He followed me in, grabbing at my arm and scooting closer and closer in the dark back cabin until I was pressed against the door. I told him to stop. I told him it was not OK. He laughed. When I reached my apartment, I vomited. Later that night he texted: 'Night strictly bitness.' The incident wasn't the first with Teague."

Rayno said Teague had also sent her suggestive text messages prior to that night. The two university employees who'd previously accused Teague of sexual harassment cited similar behavior by the former athletic director. On Friday, the university released redacted transcripts of sexually explicit text messages Teague had sent to one of the women in the incidents that led to his resignation.

President Eric Kaler announced Friday that Beth Goetz, deputy athletic director and senior women's administrator who worked at Butler before her arrival at Minnesota in 2013, would become the interim athletic director.

In a statement to the Star Tribune, Kaler apologized to Rayno.

"I am disappointed to learn of an additional report of sexual harassment against the former director of Gopher Athletics," Kaler said. "Our commitment to ensuring a healthy learning, working and living environment at the University extends beyond our faculty, staff, and students. I deeply regret to now learn that a reporter covering the University was also subject to this type of deplorable behavior and I extend a sincere apology to Ms. Rayno."

The university has asked anyone who has experienced similar harassment to come forward through UReport, a confidential reporting service that can be reached at 1-866-294-8680 or ureport.ethicspoint.com.