Spurs expect DeRozan back for clash with Clippers 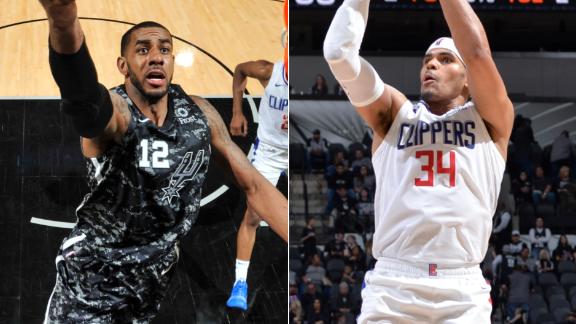 The San Antonio Spurs hope to be at or near full strength when they host the Los Angeles Clippers on Sunday. The Clippers can't even hope to be that fortunate on the injury front.

The Spurs head home after sweeping a two-game road trip, in Dallas and Minneapolis, with the latest win a 116-113 nail-biter against the Minnesota Timberwolves on Friday.

Marco Belinelli canned a pair of crucial free throws with 4.2 seconds the play to cement the win while LaMarcus Aldridge poured in 25 points in a contest that was close throughout, with 27 lead changes and 17 ties through the middle of the fourth quarter.

Rudy Gay scored 22 points for the Spurs, while Belinelli racked up 19 points, Derrick White added 15, and Davis Bertans and Bryn Forbes poured in 11 and 10 points, respectively.

"We got through some stuff, and it's always good to win on the road," Spurs coach Gregg Popovich said afterward. "It's always difficult to do, but when you do it feels pretty good."

The Spurs have now won 16 of their past 18 games against Minnesota. The victory was accomplished even though San Antonio played without leading scorer DeMar DeRozan, who aggravated a left ankle injury in pregame warmups and was ruled out just prior to tipoff.

Popovich said DeRozan likely will return against the Clippers.

"He has a lot of bumps and bruises," Popovich told the San Antonio Express-News or DeRozan. "He came in stiff on Friday. His thigh has been hurting and his ankle. He has been playing a lot of minutes, more than most people, and it seemed better to let his body recover."

Popovich garnered his 520th career win on the road, tying Pat Riley for the most in NBA history.

The Clippers travel to south Texas on the heels of a 112-94 home loss to Golden State on Friday. It was Los Angeles' season-worst fifth straight defeat.

"We didn't have a lot of scoring out on the floor tonight," Los Angeles coach Doc Rivers said afterward.

The Clippers played without injured sixth man Lou Williams, who is battling a sore right hamstring. Rivers also said that Williams, who suffered his injury Wednesday against the Utah Jazz, is likely to miss the next couple of games.

"It was tough on me because in the third quarter, second half, we needed that extra scoring threat," Harris told the Los Angeles Times. "We need other guys to pick up the load and just be ready to play. That's our mentality and we'll be ready for it."

To make matters worse, Los Angeles forward Danilo Gallinari was forced from the game after eight minutes with lower back spasms and didn't return.

"He got hit in the game early and you could see his movement was wrong," Rivers said of the decision to pull Gallinari. "I asked him early, and he said he got hit in the back, said he wanted to go a little bit more. Then I saw him moving and I was like, 'Time to go home.'"

The Clippers will monitor Gallinari's back as they head out on a four-game road trip that begins in San Antonio.

The Spurs have taken two of the three games with Los Angeles this season and own a 72-13 edge at home in the all-time series.