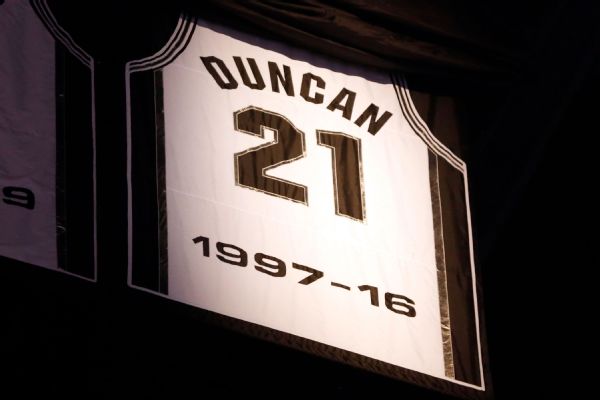 "I'm going to tell you this: I won a lot of bets tonight," Duncan joked. "I didn't wear jeans. I wore a sport coat, and I spoke for more than 30 seconds. Thank you, San Antonio. Thank you."

"To all of you in here, the fans, all of San Antonio, thank you," Duncan said. "The love and support is overwhelming, especially over the last couple of weeks. I've heard from teammates, from the guys I've been with forever, to guys I played a year or two with, to these jokers over here; just an amazing response, and just an overwhelming amount of love from these guys for what I meant to them. And it doesn't even explain how much they meant to me because I got so much more from you guys, from my teammates, than they can explain that they got from me. And I know that."

In a hall outside the San Antonio locker room, a group led by former Spurs Bowen and Robinson jokingly made predictions prior to the game about the anticipated length of Duncan's speech. None of the mock speeches lasted longer than a minute, while Duncan actually spoke more than four times as long.

Brooklyn Nets general manager Sean Marks, who played with Duncan on the Spurs from 2003 to 2006 and served as an assistant coach from 2013 to 2016, attended the ceremony with his family, despite the fact his current squad was on the road Sunday at Philadelphia. Former Spurs Malik Rose, Antonio Daniels, Danny Manning and Will Perdue also attended Sunday's ceremony, as did Atlanta Hawks coach Mike Budenholzer, a former San Antonio assistant.

Inside the locker room before the game, the team's equipment staff passed out socks to the players with Duncan's No. 21 emblazoned across one side. Parker, Ginobili and Pau Gasol each posted messages on Twitter with the hashtag #ThankYouTD.

Duncan, Parker and Ginobili combined to capture 126 career playoff victories together, the most in NBA history by any trio. That group also owns the most regular-season wins in NBA history (575) and is the first set of three teammates or more to win four championships together since Magic Johnson, Kareem Abdul-Jabbar, Michael Cooper and Kurt Rambis, according to Elias Sports Bureau research.

Parker often joked that for nearly his entire rookie season Duncan never spoke to him, but he complimented Duncan for all their off-the-court interactions, which often lifted the point guard's spirits as he struggled to deal with a demanding Popovich early in his career.

"He's the only teammate that never asked me or talked to me to get the ball," Parker joked. "He just looked at me. And when you're 19 years old coming from France, that's very scary when he looks at you. He doesn't have to talk to you. Most of the guys [are like], 'Hey, Tony, I'm open.' But Timmy just looked at me. I'd be like, 'Hey, Pop, Timmy looked at me. We should run a play.' Pop would be like, 'He really looked at you?' I was like, 'Yeah, so we should run a play. If you want me to be the point guard tomorrow, [let's] pass him the ball right now.'"

Ginobili told a story about the 2006 NBA playoffs to illustrate the type of teammate Duncan was. Ginobili committed a late turnover that cost the Spurs a game against the Sacramento Kings, tying the series at 2.

"I wanted to vanish," Ginobili said.

But Duncan called Ginobili's hotel room on five occasions before finally getting him.

"He invited me to dinner, and we talked for hours about computers, cars, TV shows, whatever," Ginobili said. "My mental state shifted, and I had a way better night than it would have been otherwise. Those are the types of gestures that I'm pretty sure that you can go and ask most of his teammates around, and they all saw it.

"So since I have the opportunity now, thank you, Timmy. Thank you very much for all these years. Thank you for the four rings I have in my home because of you. Thank you for making me better, and everybody that ever played with you."

Duncan played all 19 seasons of his NBA career under Popovich, and they captured five championships together. Only Kobe Bryant (20) played more seasons with a single franchise, and John Stockton (19) is the only other player with at least that many seasons with the same squad.

"To R.C. and Pop, we're all part of a puzzle. You guys put it together, and we're out here every year, winning and winning championships and creating an atmosphere that we like to take some credit for, but you guys put [it] together. Thank you," Duncan said. "Thank you, Coach Pop, for being more than a coach -- for being more like a father to me. Thank you."

Duncan retired ranked second in playoff victories, first in postseason double-doubles and third in rebounds. The 15-year span between Duncan's first (1999) and last NBA championship (2014) ranks as the second-longest span in league history behind Abdul-Jabbar (17 years) among players participating in both NBA Finals series, per Elias research.

Duncan also joins John Salley as just the second player in the league annals to win an NBA title in three different decades.

"I don't know how many accolades you could ever put up on this guy," said Pelicans coach Alvin Gentry.

"He's just a tremendous guy, the best power forward that ever played the game. Probably, if you talk to anyone that knows him, he's probably the most low-maintenance superstar that ever played the game; just a tremendous guy, a great person. This couldn't come or happen to a better guy," said Gentry. "There was no reason to wait. It's not like they were going to decide somewhere along the line his number was going to be retired. It was going to happen. So I think it's great that they're doing it early and doing it right now before he's even a year out of the league."

He is just the third player in NBA history to capture 1,000 career regular-season wins, with only Abdul-Jabbar and Robert Parish owning more career victories.

Gentry pointed to Duncan's reputation for being coachable as one of the keys to his success. Gentry gave his Pelicans players the freedom to attend the jersey retirement ceremony if they chose. He said his team would be spending the night in San Antonio after Sunday's game.

"The big thing that differentiates [Duncan] from the other superstars is that he wanted to be coached just like the 12th or 13th guy on the team," Gentry said. "You're able to get on him, you're able to do a lot of things, and he's just a tremendous guy. I was in Phoenix most of the time, and he made life miserable for us there. So we kind of wish he would've retired about eight years ago. I think we would have been much better off in Phoenix.

"He's a great player, such a team guy. ... He's a great leader on this team, and I think anybody that has ever played on this team would tell you the same. More so than anything, I think he just wanted to be one of the guys. He wanted to fit in and be one of the guys, and of course as a coach, you love that situation because with the humility that he has, that makes him just very coachable. Whenever you're able to coach your superstars the way that Pop has been able to coach him, then the other guys, they really don't have a choice. They have to fall in line."

Duncan remains embedded with the Spurs and has appeared frequently at practice this season, working out with former teammates while spending time playing one-on-one with Gasol and counseling younger players, such as Jonathon Simmons and rookie point guard Dejounte Murray.

Popovich has said that whenever Duncan is ready, he can be "coach of anything he wants," but it's an offer the team doesn't expect Duncan to take. Popovich has said Duncan "is too smart for that."

Duncan also spends time at his BlackJack Speed Shop, which specializes in custom performance upgrades for cars, and shooting local spots for grocery store chain HEB. The chain debuted its new commercial during Sunday's game that featured Duncan and his new cereal, Slam Duncan O's. Seconds later, parachutes cascaded from the rafters with samples of the cereal attached.

As Popovich finished up his closing remarks regarding Duncan on Sunday, he pulled a tissue out of the left pocket of his jacket before stuffing it back in, saying he promised he wouldn't need to use it.

"I don't even want to talk about rebounds, points and all that sort of thing," Popovich said. "This individual made it possible for everybody we brought in throughout the years to be a part of this culture and be a part of this program. As everybody said: His empathy, his ability to make people welcome, and lead quietly, but with dignity and gravitas, made him special beyond most anybody that you could imagine.

"This is the most important comment that I can make about Tim Duncan: I can honestly say to Mr. and Mrs. Duncan, who have passed, that that man right there is exactly the same person now as he was when he walked in the door."