Stan Van Gundy on refs: LeBron James can 'do whatever he wants' 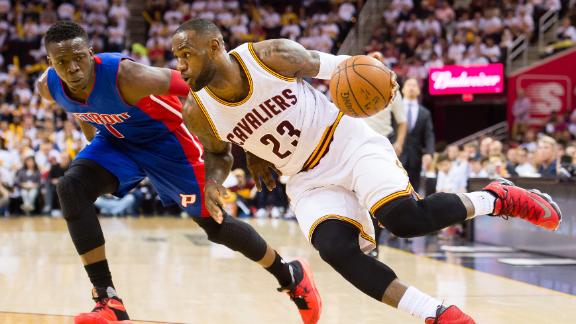 While discussing the Pistons' composure during an interview with ESPN's Lisa Salters at the end of the first quarter of Sunday's 106-101 Game 1 loss to the Cavs, the loquacious coach directed frustration toward the officials for what he felt were missed calls that went LeBron James' way.

After the game, Van Gundy backpedaled and said the officiating was not the reason Detroit lost.

"Look, I thought it evened out really well," Van Gundy said. "But early on, I thought there were two pretty obvious offensive fouls down there on him. But it's two calls in an entire game after that. Look, the refereeing had nothing to do with tonight. They did a good job. It went both ways. I thought they did a really good job. It was decided by the players on the floor, as it should be."

Van Gundy said he felt he could have done things differently.

"I'm not going into those," Van Gundy said. "Because those are game-plan things."

Van Gundy: LeBron gets to do what he wants
In between quarters, Pistons coach Stan Van Gundy tells Lisa Salters that his team has to realize that Cavaliers forward LeBron James is not going to get offensive fouls called on him and not get upset about it.