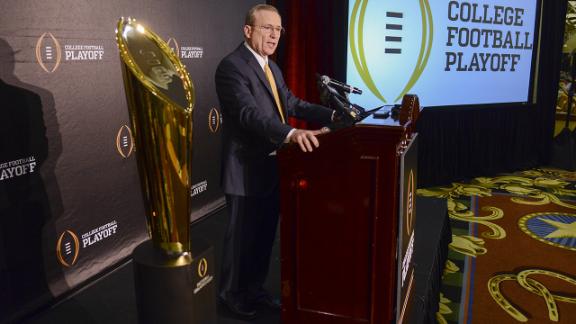 When the 2014 season began, Mississippi State was unranked and considered by many to be an afterthought in the inaugural College Football Playoff.

"From the beginning of the season, he was really strong on Mississippi State," said Patrick Herb, who works in Wisconsin's athletic department and prepared statistics for Alvarez every Sunday during the season. "He liked the amount of seniors they had and their toughness on both the offensive and defensive lines. He identified that really early."

Talk about an "eye test."

It wasn't until the fifth week of the season that Mississippi State even appeared in the Associated Press Poll -- debuting at No. 14 -- but when the 12 members of the College Football Playoff unveiled their historic first ranking, the Bulldogs were No. 1.

The playoff's selection committee has an abundance of statistics available to help determine the top four teams in the country, and while the majority opted to crunch numbers on their own, some of the sitting athletic directors like Wisconsin's Alvarez found it beneficial to get some help. All of them agreed, though, that the statistics were only a part of the equation -- data used to either confirm or negate what they were watching on Saturdays.

"We would spend some time trying to figure out if what he was seeing on tape was bearing out on the statistical and analytical side as well, so that when he would go into the room, he would be armed with more than just, 'Well, here's what I'm seeing, these are my opinions,'" said Herb, Wisconsin's sports information director for men's basketball.

"We found that the statistical and analytic side of the stats that we were charting supported what he was seeing, that yep, [Mississippi State] is a really productive team and a team that's going to win a lot of games and beat good teams," he said. "It was very validating for him to come up with his opinion of a team early on and then have the statistical and empirical data match that or validate that."

Alvarez, USC athletic director Pat Haden and Clemson athletic director Dan Radakovich all met with either staff members or students on fall Sundays before flying to Dallas with their top 30 teams in hand -- fluid lists that could change on the plane ride and often would change during the official voting on Mondays and Tuesdays.

Haden said he had a few students come to his office from 1-4 p.m. on Sundays, and Radakovich worked with former Georgia Tech defensive lineman Darryl Richard, who was hired as Clemson's assistant director of business operation last summer but has since left the school.

Radakovich said he plans to continue to have research help this fall. A student or staff member will come into the office on Sunday nights and together they will look for any interesting trends, or teams that have made a big move statistically.

"I'm probably a little different from a data perspective than Pat and Barry because of coming up as a CFO within my career path," Radakovich said. "We do a little more of that than maybe the attorney and the coach, but no doubt it's important to have some type of assistance in gathering data because we're watching games, we're talking to conferences and other places getting ready for those Monday meetings, and any type of information that you're able to get pulled together and placed in front of you really helps speed through your understanding of the total picture."

Most of the committee members -- if not all of them -- have found a way to streamline the statistics, prioritizing about four to six. Both Alvarez and Tom Osborne -- arguably the two most influential members on the committee -- placed high value on relative scoring offense and relative defense, and turnovers.

"I did all of my own work on statistics," Osborne said. "I put a great deal of emphasis on relative scoring offense and defense, turnovers, field position and kicking. The committee did a great deal of work concerning strength of schedule. At the end of the process, championships and performance against top competition came into play as well."

Herb said he and Alvarez came up with a points system to help rank the teams that also included hidden yardage and strength of schedule. They also reached out to Kevin Pauga, the director of basketball operations at Michigan State and founder of KPIsports.net, for additional metrics. Herb said his job was merely to present the stats -- he wasn't trying to be the committee member.

"I didn't think that was my role," he said, "to influence his opinion."

Similarly, the students at USC were more of a resource than a sounding board.

"I did have a couple of students here really grind some numbers for me," Haden told ESPN.com this spring. "I said, 'Here are the metrics that are really important to me,' and then I would meet every Sunday from 1-4 going through these metrics and their teams and the games, in particular the conferences I had to report on, and then create my 1-30 ranking."

Radakovich said his evaluation of the statistics "was not the defining factor."

"There were teams that were statistically incredible during the year, but when you watch them, you say, 'Wow, they're not living up to that great statistical level that they became through those numbers," he said.

After watching how seriously Alvarez took his job, Herb said his confidence in the entire system is high entering Year 2 of the College Football Playoff.

"That's one thing I was pleasantly surprised with," he said, "was I knew how much thought and effort and time coach Alvarez was putting into it, but in talking to him, he was blown away with some of the effort and some of the hours that other people were putting in, too. I was really pleased to hear that. He would tell me specific people and say, 'This person, they would come in with lists and charts and data, and this person would say they watched X amount of games over the last three days.' He thought that by and large everybody was well-prepared."

Some just had a little more help.