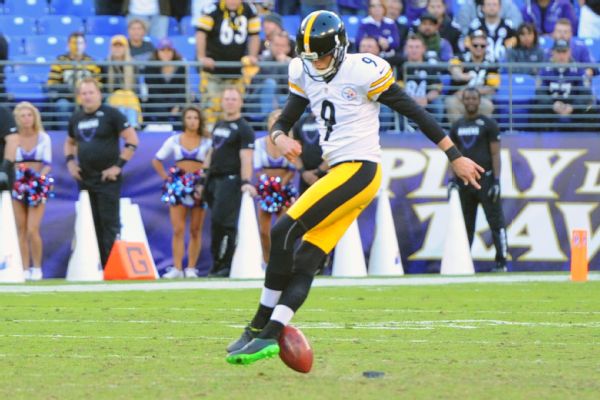 PITTSBURGH -- Steelers coach Mike Tomlin said he would let Chris Boswell retry his "rabona" onside kick that failed miserably in the final minute of Sunday's 21-14 loss to the Baltimore Ravens.

With 48 seconds left, Boswell attempted to switch legs midmotion to push the ball to the other side of the field when the opponent doesn't expect it. Boswell miffed the attempt, which classified the play dead as an illegal kick.

Tomlin on Tuesday said he wasn't down on the play, only on Boswell's failure to "execute under pressure."

"We felt comfortable about allowing him to deliver that kick based on what we've seen him do here in practice-like settings," Tomlin said. "Would I give him the opportunity again? I would, based on what I've seen in preparation."

Boswell, who signed with Pittsburgh as an undrafted free agent last season, pulled off the kick at least once for Rice.

In Steelers injury news, center Maurkice Pouncey underwent minor surgery on his injured finger, but the injury is not a long-term issue. He's expected to practice later this week.

The Steelers could get a boost from tight end Ladarius Green (physically unable to perform list, ankle) and pass-rusher Bud Dupree (groin, injured reserve). Both will practice this week and have a chance to play as soon as Sunday against the 7-1 Dallas Cowboys.

Green has been practicing for two weeks, and Tomlin said he's pleased with his progress. The Steelers need playmaking help.Dupree will practice Wednesday, starting his 21-day window for the Steelers to decide on his status.