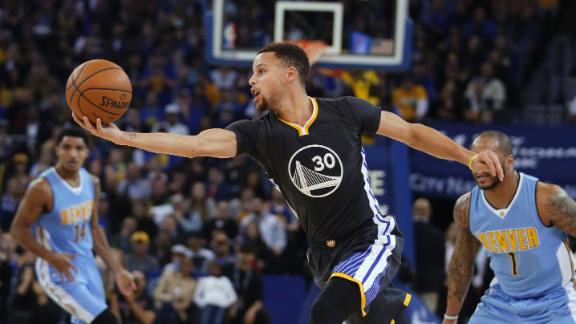 After missing the two previous games with a left shin bruise suffered Monday against the Sacramento Kings, Curry reinjured the shin and departed to the locker room with 2:15 remaining in the second quarter.

According to Curry, the injury occurred when a Nuggets player,Jameer Nelson, made contact with his leg in the second quarter.

"I got kicked," Curry said after the game.

Curry confirmed it was a reinjury of his earlier bruise and said he was hit "right in the same spot, playing defense. It's funny. I guess whenever you hurt something, [if] you try to play through a little bit of discomfort and try to get out there, something happens. Just got to deal with it."

Curry's injury left the Warriors with only six available players because of myriad other injuries.

Curry praised Golden State's overtime victory despite depletion. "Chips stacked against them, short bench, guys playing 40-plus minutes, found a way to scrap and claw, get stops down the stretch, fight through the fatigue factor, make a couple plays on the offensive plays as well," he said. Gutsy win."

On how he felt going into the game, Curry said, "I felt pretty good, just somewhat fresh legs and didn't have to compensate for anything. Just sucks that was the spot that I got hit in. See how it feels for Monday."

Further elaborating on his prognosis, he added, "I know exactly what happened. It's just a matter of how it feels tomorrow and go from there. It's not as bad as the first time it happened, so that's good news."

On Monday, the Warriors are set to host Curry's hometown Charlotte Hornets.