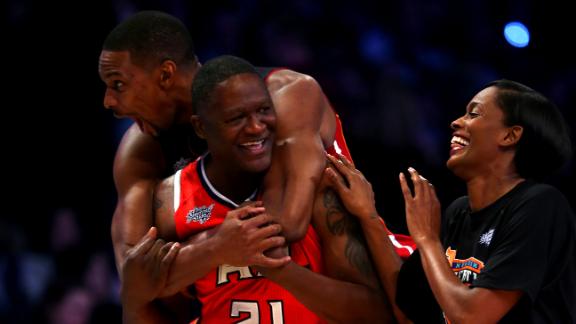 Two pairs of Stephen Curry's shoes that he was set to wear in Saturday night's All-Star competitions were stolen, an Under Armour spokesman confirmed to ESPN. The theft was reported in time so that backup pairs of shoes with the same design were on his feet Saturday night.

The NBA told shoe manufacturers to send shoes of their players to the Nets and Knicks equipment managers depending on whether their players were playing in the All-Star events at the Barclays Center or Madison Square Garden.

A source confirmed that Curry's shoes were signed for when they got to Brooklyn on Friday, but that they were never delivered and went missing.

The news was first reported by sneaker blog Nice Kicks.

Under Armour had backup pairs and those shoes, a source says, were carried to the Barclays Center for Curry to wear in the 3-Point Contest and the Shooting Stars competition, where he competed with his father, Dell, on Saturday night.

The shoes are not the Golden State colors of the Curry One that Under Armour first released Friday. In the 3-Point Contest, Curry wore the "Candy Reign" colorway, inspired by his love of Sour Patch Kids. For the Shooting Stars, he and his father wore a colorway that matches the colors of the Hornets, where his father made his name.

Curry said Saturday he would write the name of Deah Shaddy Barakat on his shoes for the 3-Point Contest. Barakat, a Curry fan, was killed this week in Chapel Hill, North Carolina, in a triple homicide.